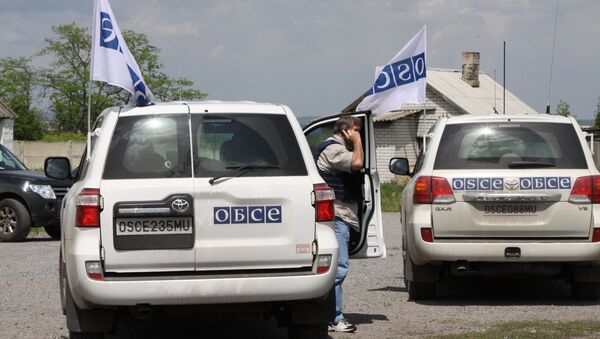 The Russian envoy to the Ukraine contact group said that an OSCE mission with armed members could be deployed along the line of disengagement on Donbass.

MINSK (Sputnik) — An Organization of the Security and Co-operation in Europe (OSCE) mission with armed members could be deployed along the contact line in Donbass, Russian envoy to the Trilateral Contact Group Boris Gryzlov said Wednesday.

According to Gryzlov, the sides of the Ukrainian conflict have failed so far to withdraw troops along Stanytsia Luhanska, and this issue was one of the main points of discussion at the Trilateral Contact Group meeting earlier on Wednesday.

"After implementing the task [of withdrawing troops along Stanytsia Luhanska], an OSCE police mission armed with service weapons could be introduced along the line of disengagement. That is of course if this international organization will be ready itself," Gryzlov told reporters.

The process of withdrawing troops is underway at previously agreed sites, Gryzlov added.

Following marathon talks with Russian, German and French leaders in Berlin last week, Ukrainian President Petro Poroshenko claimed that Moscow had agreed on the need to deploy an armed OSCE mission in Donbass. He said he expected Berlin to raise the issue at the pan-European security organization.

On October 20, Russia's permanent representative to the OSCE called it "Ukraine's invention" and said there were no prerequisites for the move.

Russia proposes to finalize the procedure for the long-promised law on the special status of the two regions in east Ukraine to enter into force at the next Trilateral Contact Group session, the Russian envoy said.

"Russia has proposed at the next Contact Group meeting to finalize the procedure for the entry into force of the law on the special status of separate Donetsk and Lugansk regions on the basis of the 'Steinmeier formula' with its signing by all parties," Gryzlov told reporters.

Under the formula proposed by German Foreign Minister Frank-Walter Steinmeier, the Donbas self-government law is first applied on a provisional basis during local elections, then becomes permanent once the election results are certified under OSCE procedures.

Donetsk Militia Spots More Foreign Mercenaries, This Time From Poland
Kiev launched a special military operation in Ukraine's southeast in April 2014, after local residents refused to recognize the new Ukrainian authorities, which came to power as a result of a West-sponsored coup.

In February 2015, Kiev forces and Donbass independence supporters signed a peace agreement in the Belarusian capital of Minsk. The deal stipulates a full ceasefire, weapons withdrawal from the line of contact in eastern Ukraine, as well as constitutional reforms that would give a special status to the breakaway Donetsk and Lugansk People's Republics.