Daesh May Bring Unpleasant Surprise to US-Led Coalition in Mosul 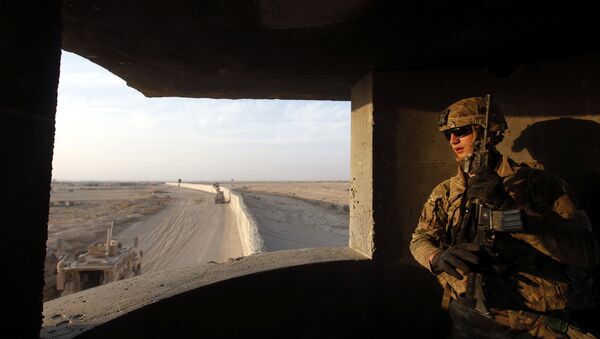 © REUTERS / Alaa Al-Marjani
Subscribe
Although Iraqi senior officials signal that the US-backed coalition forces are moving toward Mosul more quickly than expected, Daesh's fierce resistance can bring an unpleasant surprise to the coalition, dealing a heavy blow to its unity.

While Iraqi Prime Minister Haider al-Abadi is signaling that the US-backed forces are advancing on Mosul "more quickly than expected," there are plenty of surprises still in store, retired US Army colonel Daniel L. Davis reminds his readers.

"Such statements, while encouraging to his nation, are deceptive. The real fighting has yet to start. It is also vitally important to realize that if ISIS [Daesh] chooses to fight to the death in Mosul-like the Texans' historic Alamo fight-it is not inconceivable that ISIS could achieve strategic victory even if it is eventually defeated in Mosul," Davis writes in his recent opinion piece for The National Interest.

Mosul Trap: US-Led Coalition's Operation to Create New Challenges for Assad
The retired colonel warns that although Daesh fighters are regarded as "mindless thugs, heartless terrorists and common criminals," they "have significant experience battling against traditional military forces," posing a formidable tactical threat to the US-led coalition and its allies.

"If the Islamic State has adopted the 'Alamo' strategy, it may be willing to suffer 50, 60 or even up to 75 percent casualties, yet still tenaciously fight on," he warns, referring to the historic battle between Mexicans and Texan revolutionaries in February, 1836.

Citing an independent blog Mosul Eye, Davis suggests that as Daesh fighters have few places to flee to they have virtually no motivation to surrender.

"This cobbled-together coalition does not have natural cohesion," Davis emphasizes, "If this fight drags on and casualties begin to mount among the various militias, the chances for intra-coalition conflict rises."

US Not Doing Enough to Prevent Civilian Deaths in Syria, Amnesty Tells Sputnik
According to the retired colonel, in the event of Turkish armed forces stepping in, the situation could become even more complicated and unpredictable.

"This unsavory mix is much of the problem," Byman remarked referring to the military groups struggling to liberate Mosul from Daesh.

"Sunnis dominate Mosul, and they see the Iraqi government and especially the Shiite militias as hostile, Iranian-backed forces… The Kurds claim parts of Mosul, making its possession one more stake in the bitter contest between Iraqi Arabs and Kurds. Other minorities, such as Yazidis, Assyrians, and Chaldeans, also claim areas in or near Mosul as part of their historic homelands," he explained, adding that "foreign powers compound the problem."

However, despite all these challenges, it is still possible that the US-led coalition will breach Daesh's defenses and retake the city, Davis notes, adding that it would be a serious mistake to underestimate the terrorist organization's capabilities and "expect the best."

US 'Has no Better Option Than to Keep Trying to Work With Russia' in Syria
The situation is complicated by the fact that the Obama administration is apparently rushing to claim victory over Daesh militants before the November presidential election.

Speaking to RIA Novosti Alexei Fenenko, a senior researcher with the Russian Academy of Sciences' Institute of International Security Studies, underscored that the Obama administration needs to demonstrate at least some success in its Middle Eastern policies before leaving the White House.

"The only success of the US and its allies in this fight dates back to autumn of 2014 when they were able to defend Baghdad. In other words, President Obama has nothing to provide as an example of a successful fight against Daesh and he is now looking for at least one success he can point to," Fenenko stressed.

On the other hand, Sputnik observer Vladimir Bychkov assumed that the Mosul liberation could become an "undefeatable ace of trumps in Clinton's pack of cards."

In an interview with Sputnik Persian, Soheib Ahmad Kakeh Mahmoud, a journalist from the Kurdish News Network in Iraqi Kurdistan, echoed Bychkov by saying that "the liberation of Mosul will become a proud moment for the Democratic Party president and it will essentially support the candidate in the elections from the same party, Hillary Clinton."

The idea has also surfaced in the US media. At the third presidential debate Republican nominee Donald Trump suggested that the timing of the Mosul operation was chosen to pave the way for Hillary Clinton and her campaign to the Oval Office.