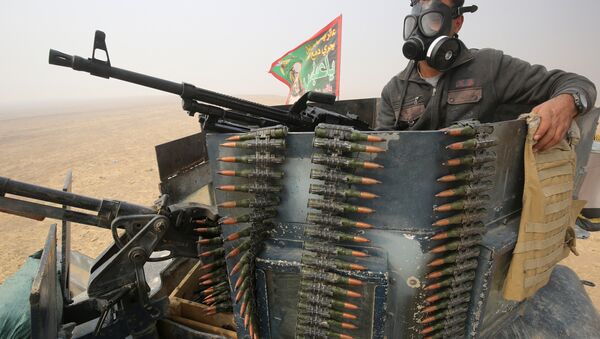 © AFP 2021 / AHMAD AL-RUBAYE
Subscribe
Commenting on the much-discussed suggestion that the real aim of the offensive to liberate the city of Mosul in northern Iraq from Daesh is to demonstrate to US voters some vivid success in the US-led fight against the terrorist group ahead of November's elections, a Russian political analyst suggests that the real purposes are much wider.

Mosul Operation Poised to Become 'Ace of Trumps in Clinton's Pack of Cards'
"Indeed, the chief purpose behind the stirring-up of US military activities near the Iraqi city of Mosul seems to be the demonstration to American voters of some apparent and "vivid" successes of the US Democrats in their foreign policy and in the suggested fight of the Obama administration against Daesh (ISIL/ISIS)," Vladimir Lepekhin, a Russian political analyst with the Director of the Eurasian Economic Community (EurAsEC) Institute writes in his article for RIA Novosti.

"However such a hard-hitting PR campaign to glorify the American Democrats in the north of Iraq wouldn't have been possible if not for the common interests of the Obama administration, the Pentagon and the largest transnational corporations of the US and the Persian Gulf," he further explains.

Many experts believe that the joint PR campaign of the US State Department and Pentagon on the "liberation" of Mosul might be well over by November 8, the final day of the US presidential elections, as there will be no further need for US participation in the operation.

Lepekhin, however, suggests that it is only partially true. On the one hand, he says, there will be less motivation for the US State Department to participate in the offensive after the election of the country's new president. 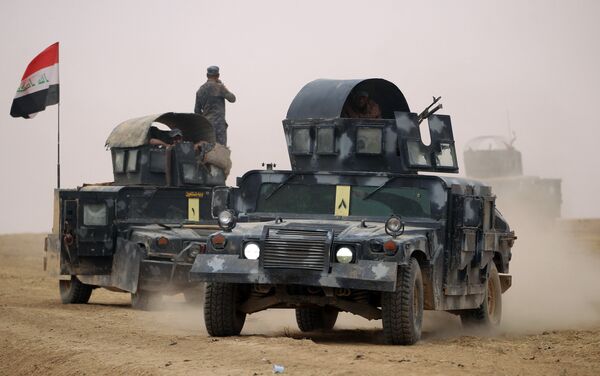 Iraqi forces gather in the al-Shura area, south of Mosul, on October 24, 2016, during an operation to retake the main hub city from the Islamic State (IS) group jihadists
© AFP 2021 / AHMAD AL-RUBAYE

On the other, all the activities either for or against Daesh are not of a local but of a global-strategic character.

"It only too clear that by manipulating this terrorist group, the US is pursuing its long-term aim to gain control over the whole of the south of Eurasia," the political analyst says.

"The major interest of the transnational players, including leading American, Saudi Arabian and Qatari hydrocarbon producers who back up Pentagon and the US State Department, is not in liberating Mosul from Daesh but in using the terrorist groups as an instrument to solve their own problems," Lepekhin says.

In Syria, for example, they use the terrorists to topple President Assad in order to gain control over the territory of a possible transit route for hydrocarbons from the Persian Gulf and Iran into Europe, he says. 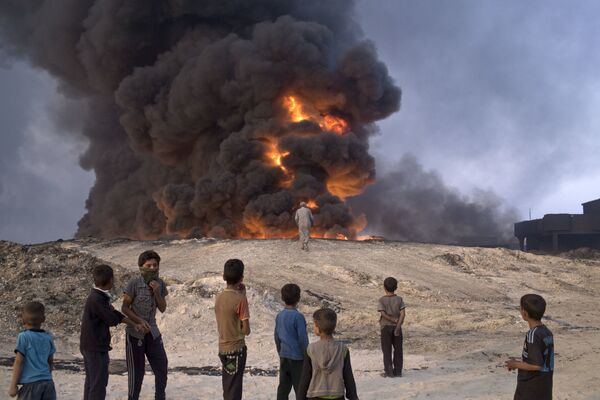 In northern Iraq, the same very players are pursuing the same very purposes by using the terrorists who captured Mosul to further their own interests.

The political analyst further notes that the Islamic State (Daesh) was set-up not only to control Syria and oil-fields of Iraq. There are other transit territories in the region that should be taken under control. 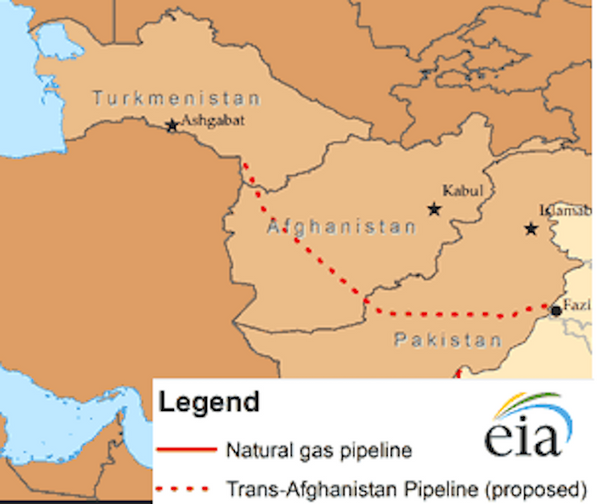 Moreover, there are plans to construct a northern branch, which will run through Kazakhstan and Russia into Europe and to the West – through the Caspian Sea into Azerbaijan and further on.

This very project, Lepekhin says, is a direct and serious competitor to the above mentioned Americano-Saudi and Americano-Qatari companies who support Hillary Clinton in the presidential race.

Besides, China is actively participating in the development of the Galkynysh gas field.

Clearly, such a large-scale project can't be "left unanswered" by the aforementioned geopolitical players.

They will go north

The political analyst therefore suggests that Daesh militants and similar terrorist groups are the only real force able to disrupt the TAPI project or at least stall its implementation. For this very purpose, the destructive energy of jihad is likely to be re-directed to the north. 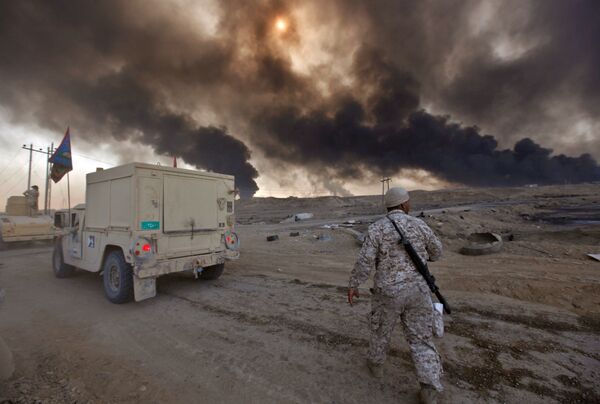 Iraqi army are seen in Qayyara, Iraq, October 22, 2016. The fumes in the background are from oil wells that were set ablaze by Islamic State militants
© REUTERS / Alaa Al-Marjani

"With all the above in mind, we can assert that the operation on forcing the Daesh militants out of Mosul is of double- if not of triple-purpose, which goes far beyond the fight "in support of the Iraqi government," he says.

Lepekhin then suggests the two major aims of the operation. First is to provide the militants with safe ways to relocate to Aleppo, where they may meet up with their "brothers in arms" and prevent the Syrian government and the Russian Aerospace Forces from gaining victory over the so-called "moderate" opposition in this strategically important area of Syria.

The second is to re-direct the terrorists to Afghanistan, where the majority of the strategic objects in the north-west of the country are currently under the control of the US military. 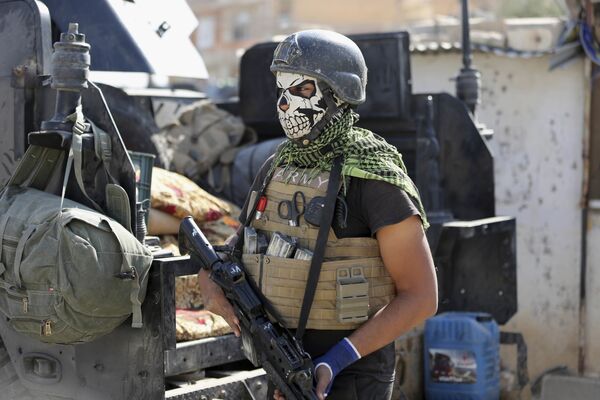 This very westernmost part of Afghanistan, which is controlled by radical Islamists in covert alliance with the US military, is used as a strategic staging ground where the US hands over the weapons, equipment and other supportive means to the leaders of major terrorist organizations.

It looks like the time has come for another such hand-over to re-grouped terrorists and their re-orientation to the north from the Afghan city of Herat through Mary city in Turkmenistan to its capital Ashgabat and further to the city of Türkmenbaşy.

Lepekhin suggests that the confirmation of the above forecasts and the answers to the actions of the US military in the north of Iraq (aimed to divert the attention of the international community from something more serious than the liberation of Mosul) will come shortly after November 8. 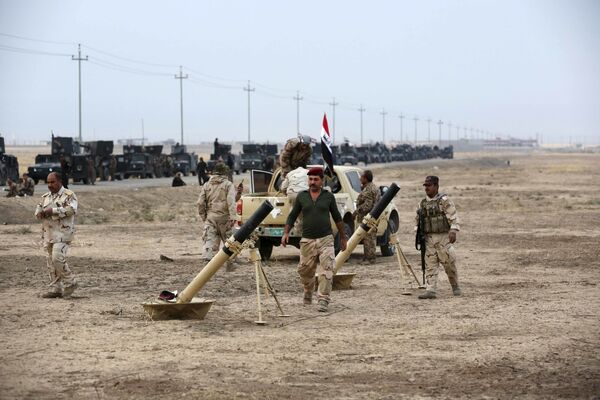 However, he says, it is already clear that the Pentagon has a "Plan B" for the region and this plan is far more fundamental that just to secure control over the drug traffic in Afghanistan or "spread democracy" in Syria.

"Political analysts increasingly note the north-west of Afghanistan is becoming the focus of attention not only of the four civilizational groups (the US, Russia, Shia Iran and the Sunnis) but of all the leading civilizations, including China and India," he says.

China is the leading consumer of Turkmenian gas. Moreover, it is interested in the implementation of its "One Belt, One Road" project, the south branch of which, with the corresponding infrastructure (including the TAPI pipeline), is supposed to run through Iran and Syria.

India is also interested, although to a lesser degree, in the Turkmenian gas. However the Americano-Qatari companies intend to tie it up to the Qatari gas. 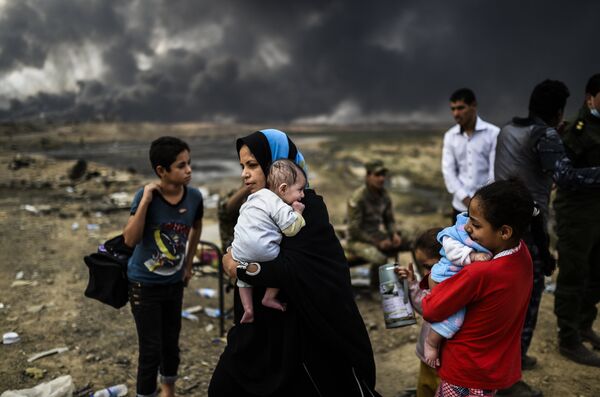 Iraqi families, who were displaced by the ongoing operation by Iraqi forces against jihadistds of the Islamic State group to retake the city of Mosul, are seen gathering on an area near Qayyarah on October 24, 2016
© AFP 2021 / BULENT KILIC

The political analyst, however, noted that Russia does not show any interest in the TAPI project for certain reasons. It is more concerned regarding its own security on its southern borders, taking into account that the north and the west of Afghanistan provide a direct penetration route to the Western powers and the militants of the Islamist terrorist organizations who implement the strategic plans of the West in Central Asia.

There is already a massive jihadist campaign aimed at the young population of the region. Additionally, this is a direct route into some of the Muslim republics of Russia.

The prospects of aggravation of the situation on Russia's southern frontiers and more persistent hints at a possible large-scale attack of Daesh militants on the post-Soviet states from the Afghan borders aim to keep not only Russia strained but all the countries of the Collective Security Treaty Organization (CSTO) as well.

These countries, the expert says, have already been weakened by anti-Russian sanctions and constant attempts to be drawn into Ukrainian, Syrian, Karabakh or other regional conflicts.