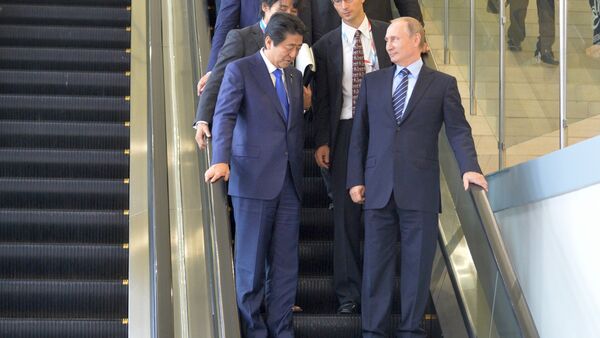 © Sputnik / Alexei Druzhinin
/
Go to the photo bank
Subscribe
Russian President Vladimir Putin's visit to Japan in December can be seen in light of Tokyo's possible shift from a close relationship with Washington to full-fledged cooperation with Moscow, according to Sputnik columnist Dmitry Verkhoturov.

The Art of Compromise: Will Japan Risk US Ire by Building Up Ties With Russia?
In his article for Sputnik's Japanese edition, Sputnik columnist Dmitry Verkhoturov suggested that Russian President Vladimir Putin's upcoming visit to Japan can be perceived in light of Tokyo's potential shift from close ties with Washington to full-blow collaboration with Moscow.

Verkhoturov recalled that Japan, which was a military ally and one of the main economic partners of the US for decades, now finds itself at an impasse.

The past 20 years have seen a "very slow economic growth" in Japan, he noted, referring to prominent Japanese economist Takatoshi Ito who attributed the current economic situation in his country to the so-called 1985 Plaza Accord.

Under the deal, Japan, along with other US partners agreed to help Washington rectify its trade deficit balance by increasing the yen rate, something which led to Japanese manufacturers losing their competitive position in the markets and yielding to Americans.

Furthermore, Japan, which was heavily restricted in terms of military development after World War II, relied on the United States in terms of security.

"However, the US's current policy in the South-Pacific region not only fails to guarantee Japan's security but also adds to Japan being drawn into a war," Verkhoturov pointed out, citing North Korea's nuclear ambitions and Washington's inability to contain Pyongyang.

As for Tokyo's relations with Russia, Japan can benefit significantly from developing these ties, Verkhoturov noted, referring to the possibility of increasing exports needed to revive the Japanese economy and Tokyo's access to raw materials, including oil and gas, at a reasonable price.

"Of course, this view can be considered extravagant,  but it explains why the Russian-Japanese negotiations and preparation for Putin's visit are in full swing, despite the fact that Abe and Putin earlier expressed diametrically opposite views over the Kuril issue," according to Verkhoturov.

He recalled that speaking at the Japanese parliament earlier this month, Abe promised that he would seek the four islands within the framework of dialogue and economic cooperation, while Putin said that Russia does not trade in its territory.

Putin's Japan Visit Could Offer Overdue Chance to Resolve Kuril Island Issue
"However, if in fact we are talking about Japan's escape from the embrace of the United States, the Kuril Islands issue is of secondary importance in this context and it should complete a series of negotiations, not start them," Verkhoturov concluded.

Meanwhile, some Russian experts believe that President Vladimir Putin's visit to Japan in December may represent the "last chance" for Moscow and Tokyo to resolve the 71-year-old Kuril Islands territorial dispute and sign a peace treaty.