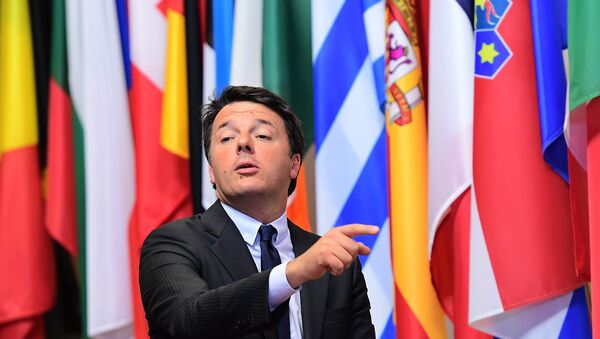 World
Fidelity, Italian Style: Rome Must Pick Between NATO Loyalty and Russian Economy
In an article written for Sputnik's Italian edition, independent political scientist Giulietto Chiesa cited an array of major political factors which he said may be behind Italian Prime Minister Matteo Renzi's move to endorse the lifting of sanctions against Russia.

Renzi had reportedly led the opposition to a proposal at the EU summit in Brussels endorsed by the UK, Germany and France to impose new sanctions on Russia over its role in Syria.

Renzi took the lead in the effort to remove the threat of sanctions from the European Council's draft statement after Austria, Spain, Greece and Cyprus also voiced their reservations, the Financial Times quoted a diplomat present at the debate as saying earlier this month.

Commenting on the matter, Giulietto Chiesa suggested that Renzi's move could be endorsed by "his friend" Barack Obama during the Italian Prime Minister's recent visit to the United States.

"Perhaps, Renzi was tasked with opening the European front to reduce tensions fueled by Washington until it is too late. If he goes to Brussels and suddenly declares that it is time to lift the anti-Russian sanctions with Russia, this means that someone or something prompted him to do so," Chiesa wrote.

Renzi Takes Lead in Group of EU Leaders' Push Against New Sanctions on Russia
So if we take into account the high level of Renzi's dependence on his overseas "friends", we can conclude that it was the US President who gave Renzi the green light for the move, he theorizes.

Secondly, Chiesa explained, Renzi knows full well that all the financial elite and representatives of industry in Italy oppose the anti-Russian sanctions and treat them with open hostility.

"Therefore, he decided that he needs to win the support of an increasing number of influential people ahead of next month's referendum on the possible amendments to the Italian Constitution, the result of which will certainly affect his own political career, Chiesa noted.

But there also is the third reason for Renzi's move, he added, referring to Europe starting to face the implications of Brexit.

"After the UK's decision to withdraw from the European Union, France and Germany suddenly remembered that Italy was one of the three presumed founding countries of the EU, deciding to again put Europe on the third pillar, namely, Italy," he pointed out.

According to Chiesa, Europe unexpectedly realized the horrendous fact that its tactical and strategic interests no longer coincide with the interests of America, which has been hit by corruption.

World
EXCLUSIVE: 'Made-in-Italy' Economy a Match for Russia Amid Europe's Meltdown
In a bid to move away from Big Brother, he argued, Europe decided to instruct Italy's Prime Minister to cope with the task and wait for Washington's reaction under both the outgoing and new Administration.

"In any case, Renzi successfully played the three games, with France and Germany yielding albeit with a certain discontent. The EU, except South and Central Europe, the Baltic States and the Nordic countries, seems to have closed the chapter on the anti-Russian sanctions," Chiesa wrote.

However, he warned, "the story is not over yet because Hillary Clinton and all those in Washington who want to punish Europe for refusing to obey want war."It only remains to be seen how the situation will develop in the near future, Chiesa concluded.