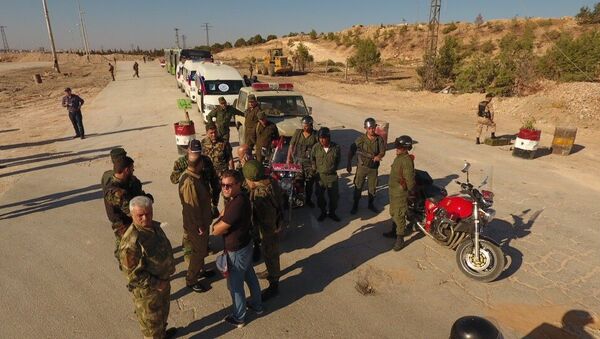 © Sputnik / Mikhail Alaeddin
/
Go to the photo bank
Subscribe
The moratorium on Russian and Syrian airstrikes in the 10-kilometre radius (6.2 mile radius) around Aleppo, effective since October 18, will be extended, the Russian General Staff said Tuesday.

MOSCOW (Sputnik) – Russia is ready to continue introducing humanitarian pauses in Syria’s Aleppo on request, but only if it has information on willingness to withdraw the wounded and civilians, the Russian General Staff said Tuesday.

According to Lt. Gen. Sergei Rudskoi, chief of the Russian General Staff Main Operational Directorate, the calls to the leaders of opposition to allow withdrawal of civilians and the wounded, as well as militants, were left unanswered.

"We are ready to continue introducing humanitarian pauses upon the first request, but only if we have credible information on readiness for withdrawal of the wounded, the sick and civilians," he told at a briefing.

The moratorium on Russian and Syrian airstrikes in the 10-kilometre radius (6.2 mile radius) around Aleppo, effective since October 18, will be extended, the Russian General Staff said Tuesday.

Militants Shelled Aleppo 52 Times in 3 Days, Killing 14 - Russian General Staff
According to the official, the no-flight regime is being observed "to this day."

On October 18, Russia, which has been assisting Damascus in fighting extremists from air, halted its airstrikes around Aleppo ahead of anticipated humanitarian pause. On October 20, Russia announced the humanitarian pause in the city from 08:00 to 16:00 local time, so both civilians and militants could leave the besieged eastern districts, and aid convoys could safely get through to those who remain there.

However, the militants refused to leave the city, and al-Nusra Front, outlawed in Russia, prevented civilians who wanted to flee the city, attacking people, during their attempts to flee Aleppo.

Russia managed to convince the Syrian army to ignore provocations and not open fire in return to the militants’ attacks, the Russian General Staff said Tuesday.

"We managed to convince the command of the Syrian army to ignore provocations and not fire back at militants," Rudskoy said.

According to the official, the representatives of the United Nations were unable to negotiate the withdrawal of civilians from eastern Aleppo during the humanitarian pause.