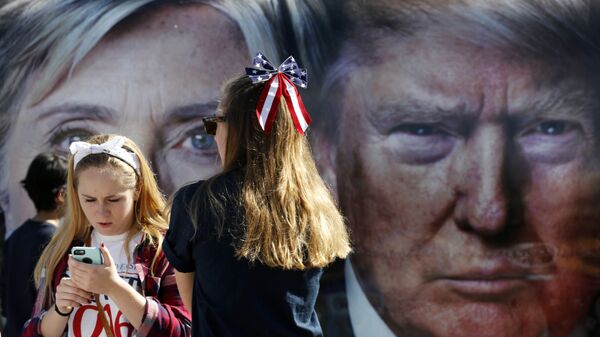 Ilya Tsukanov
All materialsWrite to the author
China, like the rest of the world, is keeping a close eye on the US presidential race, knowing full well that the outcome of the election will have a serious impact on every country in world. But which candidate would Beijing prefer to deal with?

Unlike Russian analysts, who have indicated that Moscow would probably prefer to deal with an American president with a pragmatic, rather than an ideological, approach to foreign policy, the choice for Chinese experts isn't as simple. Their choice is further complicated by the knowledge that while pre-election talk is one thing, actual policy, backed by the behemoth that is the US foreign policy establishment, is something else entirely.

US-Russia Relations to Definitely Worsen If Clinton Elected Next US President
Commenting on China's dilemma, PolitRussia contributor Ilya Novitsky suggested that at first glance, it may seem that China would prefer to deal with anyone except Donald Trump. "It's generally accepted to consider Trump as Beijing's traditional foe," the analyst noted. "In the course of his campaign, Trump has repeatedly made harsh statements about the nature of the trade relationship between the US and China."

"Specifically, Trump's main gripe with the structure of US-China trade relations comes down to the fact that China enjoys favorable customs conditions, which give Chinese producers a privileged position in the US market. Trump quite rightly believes that the Middle Kingdom is putting 'economic pressure' on the US, simply forcing US producers out of the Chinese domestic market."

In response, the Republican candidate has effectively "promised to declare a trade war against China, and to completely revise the majority of existing trade agreements between the two countries."

In this situation, Novitsky noted that "it's no wonder that political scientists around the world, almost in unison, have figured Trump as Beijing's enemy, which creates a privileged position for Hillary Clinton in the Chinese context. However, this is not quite the case…"

Keep Calm and Demonize Trump: WikiLeaks Exposes Clinton Aides' Plan
In fact, the analyst explained, "if Clinton wins, China will find itself in a very unenviable position. She may not revise trade policy as radically as Trump proposes, but the military threat to East Asia created by the Democratic candidate is quite serious."

With Clinton making little mention of her strategic plans in public, the analyst pointed to the treasure trove of information released by WikiLeaks, which has been publishing the leaked emails of Clinton campaign manager John Podesta all this month.

In one such email, featuring a transcript of a private Clinton speech about North Korea in 2013, the former Secretary of State made her position on China very clear, saying that "we're going to ring China with missile defense. We're going to put more of our fleet in the area. So China, come on. You either control [North Korea] or we're going to have to defend against them."

In a separate speech, Clinton slammed Beijing over its position in the South China Sea dispute. "I mean you claim [the South China Sea] based on pottery shards from, you know, some fishing vessel that ran aground in an atoll somewhere," Clinton quipped. By this logic, she added, the US could have labeled the Pacific Ocean the "American Sea" following the Second World War.

Donald Trump and Hillary Clinton's Positions on the Middle East
Commenting on the leaked excerpts, and the developments in US-China relations since then, including the US deployment of THAAD in Korea and its fleet in the South China Sea, Novitsky suggested that there is every indication that Clinton's policy will be to try to hem China in in its own home region.

And given the fact that Beijing, whose economic, geopolitical and military capabilities have grown exponentially in recent years, is unlikely to simply sit back and cave in to US efforts, "such plans are likely to lead to an open geopolitical confrontation, threatening a global disaster," the analyst added.

Therefore, "if we are to engage in making any sort of predictions, Beijing would probably prefer to engage in economic disputes, than risk being put on the brink of war" with Washington, the commentator concluded.