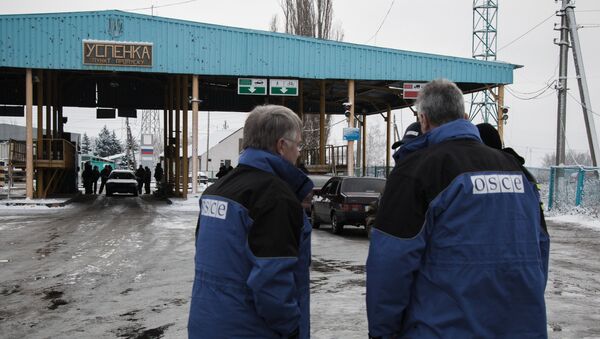 © Sputnik / John Trast
/
Go to the mediabank
Subscribe
International
India
Africa
Ukrainian President Petro Poroshenko said that the agreements on security within the roadmap for Donbass should come before the political agreements.

Poroshenko: Russia Agreed to Deploy OSCE Armed Mission in Donbass
MOSCOW (Sputnik) — The armed mission of the Organization for Security and Cooperation in Europe (OSCE) should gain control of the Russian-Ukrainian border before the elections in Donbass, Ukrainian President Petro Poroshenko said.

"At the first stage, in the period before the [Donbass] elections, we should have the [Russian-Ukrainian] border controlled by the armed OSCE mission. On the second day after the elections we should make sure that the Ukrainian military controls the border," Poroshenko told the Ukrainian television broadcasters, in an interview released on Sunday.

The Ukrainian president added that these demands were part of the Minsk deal, signed by the Ukraine’s conflicting sides, the government and pro-independence militia, in 2015. General elections in the eastern Ukrainian Donbass region, one of the provisions of the Minsk accords, have been repeatedly pushed back.

No Prerequisites for Deployment of Armed OSCE Mission in Donbass - Russian Envoy
Poroshenko also said that the agreements on security within the roadmap for Donbass should come before the political agreements.

On October 20, following a Normandy Four meeting, Poroshenko said that Russia, Germany, France and Ukraine agreed on the deployment of the armed OSCE mission,  Kremlin spokesman Dmitry Peskov confirmed that Russia would not oppose such deployment.