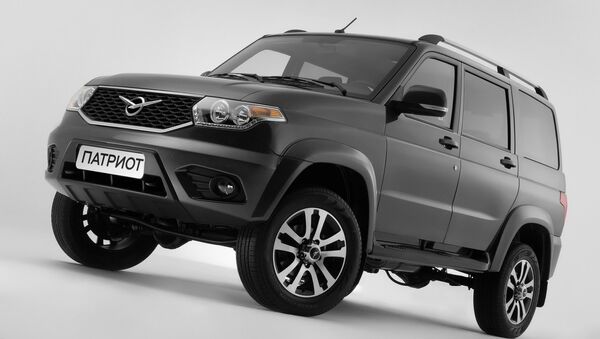 People outside Russia probably have some ingrained misconceptions about Russian-made offroad-capable vehicles, imagining rickety 40-year-old jeeps that pay no mind to driver or passenger comfort. Make no mistake about it – those exist too, but the UAZ Patriot, a mid-size SUV produced by Ulyanovsk Automobile Plant, is definitely not one of them.

The Patriot, whose production first began in 2005, was nothing short of a revolution for the Russian automotive industry when it first rolled off the assembly line. Unlike the rest of the industry, UAZ's design was unique, sleek, and instantly recognizable.

The Patriot featured a large carrying capacity, good off-road capability, cheap parts, and was priced affordably for use by villagers and urban SUV enthusiasts alike. The vehicle was leagues ahead of its predecessors – Soviet-designed military jeeps recognized worldwide among military enthusiasts. Since its creation, the Patriot itself has also been modified for military use, most recently for operations in Syria.

Last week, UAZ offered a sneak peak of its new Patriot for the 2017 model year, and according to the gearheads over at Avtovesti, the new model disappoint. In fact, having already climbed its way into the top five sport utility vehicles sold in Russia last year, the Patriot is now looking to compete with foreign SUV manufacturers in terms of quality and market share, while remaining affordable (with prices expected to range from $13,000-$16,500 US on the domestic market). In fact, UAZ's marketing for the vehicle touts it as an "SUV at the price of a sedan." 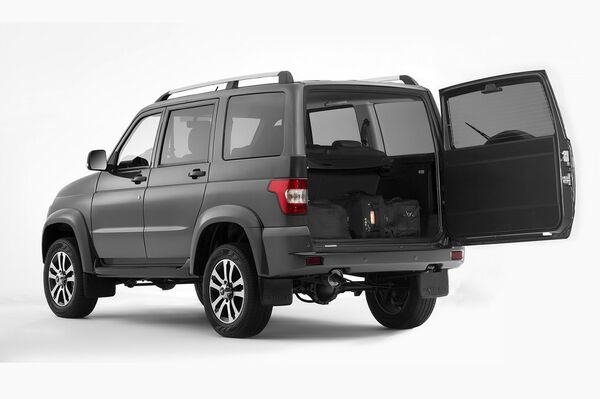 For starters, the new UAZ is expected to get two new 2 and 2.5 liter ZMZ engines, matching or exceeding the power and torque of the existing 2.7 134 horsepower gas engine. Moreover, the company has plans to introduce an automatic transmission, something city drivers have long called for, but which UAZ has put off in favor of reliability and preserving the vehicle's off-road characteristics.

Inside Look at the Horsepower Under the Hood of Russia's Heaviest Military Tech
The exterior includes a few cosmetic changes, including a new grille with a larger logo, and larger sensors on the front bumper for the optional parktronic system. The dual fuel-tank design of previous models has been replaced with a contemporary 70 liter polymer, foil and/or steel-insulated tank, designed for operation in temperatures ranging between —45 and +45 degrees Celsius. The Patriot's frame has been reinforced, and fuel lines relocated so that they do not overlap with exhaust.

But it's with interior features and comfort improvements where the company expects to fill the seats with new buyers, both in Russia and abroad. For safety, the Patriot has been equipped with two front airbags from Japanese firm Takata, along with new front seatbelts with pretensioners and force limiters. Serious modifications have been made to the bodywork, frame, and steering column to improve crash dynamics in the event of an accident; improved body-frame supports are also said to have helped to reduce vibration. 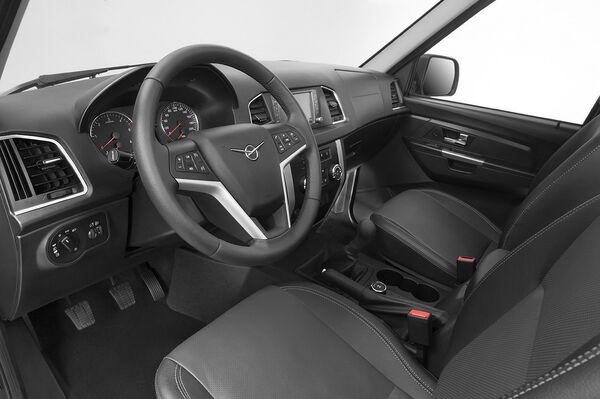 The instrument panel of the updated UAZ Patriot.
© Photo : UAZ

As far as internal electronics go, the new Patriot will be equipped with Bosch electronic stability control, traction control, hydraulic brake assist, all-terrain mode ABS, and hill-start assist. The stabilization system can be turned on and off at speeds under 70 km/h, with the vehicle's electronics mimicking cross-axle lock for assistance on icy road surfaces.

The interior features an updated instrument panel, a new cooled glove box, new transmission and parking brake levers with leather trim, and dual-stitching perforated and leatherette seat design for upper trims. All trim levels now feature tilt and telescopic steering. Higher levels include a new heated steering wheel by Takata with radio and cruise-control at the driver's fingertips. The vehicle also has new light controls and paddles with user ease of use in mind. 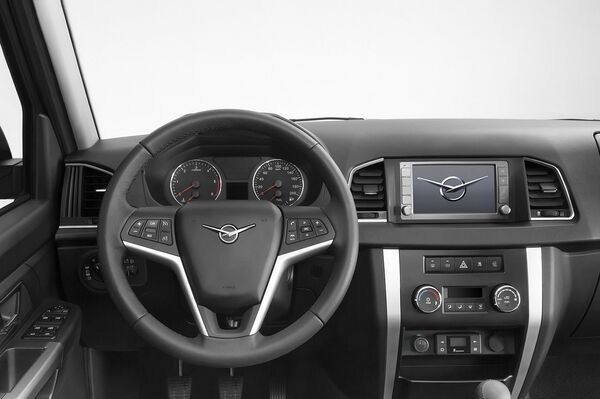 The company has ambitious plans not just for Russia and the former Soviet Union, but markets around the world as well. According to UAZ head Vadim Shevtsov, is looking to gain a foothold in Latin America, Vietnam, Africa, the Middle East, and China. Of the 100,000 UAZ Patriots expected to be produced, two thirds are expected to find foreign buyers.

In other words, Russians may continue to drive around the wide expanses of Russia, from the central Russian steppes to the Caucasus Mountains to the wild lands of Siberia and the Arctic tundra, but now they can do so in comfort and style.