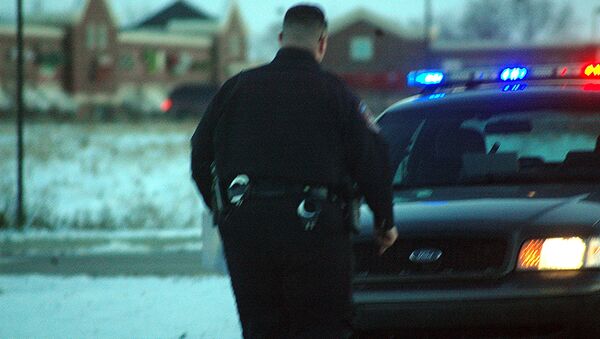 Detroit Justice Forums Slammed as ‘Hollow Response’ to Rampant Police Killings
The man is also thought to be connected with spray-painted threats against Detroit police that appeared on a city building earlier this week.

"Kill all police" and "Kill James Craig," were some of the threats found by patrol officers October 20. Craig is Detroit's African American chief of police and is known for his hardline approach to those threatening the police.

​Craig responded to the vandalism with statement calling the man who did it a "coward" and saying the Detroit police take all threats seriously.

"Given the environment that we're in today, we don't take threats lightly. Any time you threaten a Detroit police officer… that's a threat on all of us," he said.

"Just know this —I will not be deterred," he added. "The coward that did this: just know, it's a matter of time — we'll find you."

US Police Target Poor, Black Neighborhoods With Secret Stingray Surveillance
In July, Craig announced the arrests of four people who had threatened the police over the internet. According to media reports, one of the arrested, Nheru G. Littleton, 41, has been charged with making a terrorist threat and using a computer to commit a crime, both of which are punishable by up to 20 years in prison.

​According to Michigan news outlet mLive.com, Littleton posted the following: "D them racist a-- white cops!!! Kill them ALL!!! Black Lives Matter!!! Black people should start killing all white cops just kill they are killing us!!! Then and only will this s--- stop!! why you ask? Because white people will be dropping like flies!!!"

Detroit Police Chief James Craig: "He was a man of courage. A man of honor. A man of integrity… an American hero." pic.twitter.com/990RbQ8dkJ

Most likely, the arrested spray painter will also be charged with issuing terrorist threats.

"Cowards, cowards. There's only one thing to say," Craig said in his statement following the spray paint discovery. "Not one of them would do the job that our men and women in blue would do. We run toward gunfire, they run away. They're cowards, they hide behind their basements of their parents' home in some instances."