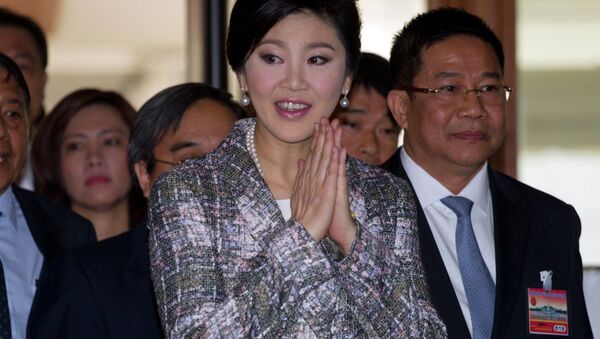 Thai MPs Vote to Impeach Former PM Yingluck Shinawatra
Thai businesswoman and former Prime Minister of Thailand, Yingluck Shinawatra, was ousted during a military coup in 2014, and has now been charged 35 billion Thai baht ($996 million) for the failed rice-subsidy policy.

Yingluck was charged with negligence in her duties as head of the National Rice Policy Committee. In 2013, Yingluck admitted that she had never attended any meetings of the committee. The punitive administrative order demands a huge monetary fee, and the seizure of Yingluck's assets.

"In terms of the order, it is not right and it is not just," she said, adding that she will fight the order in court.

Thailand is one of the world's leading exporters of rice, and controlled some 30 percent of the global rice market during Yingluck's leadership. The policy, created by Yingluck's brother, Thaksin Shinawatra, and proposed by Yingluck during her 2011 election campaign, included the state buying rice from farmers for a significantly greater price — sometimes up to 50 percent, according to Al Jazeera — than world market figures, and stockpiling it, in an attempt to create an artificial deficit and raise global market prices.

Thailand's King Bhumibol Adulyadej, World's Longest-Reigning Monarch, Dies at 88
The policy failed, as other players, primarily India and Vietnam, eagerly filled the gap, leaving Thailand desperately running out of space to store some 17.5 million metric tons of rice that was diminishing in quality every month. Aside from economic loss, Thailand almost lost its share of the global rice market as well.

According to the junta, Yingluck also used this policy to buy votes from farmers, particularly from their power base in the north, and allowing government associates to profit from it.

However, supporters of the former Prime Minister claim that the punishment was ordered to wipe out the influence of the Shinawatra family, whose party has won every election in Thailand since 2001, according to BBC.

"It is par for the course of the military coup which was to put down the Thaksin challenge once and for all," Thitinan Pongsudhirak, a political science professor at Chulalongkorn University, said in an interview for Reuters.

Thailand’s Gov’t Gets Highest Approval Rating in 18 Months
Pongsudhirak's allegation is supported by BBC analyst Jonathan Head, who points out that Yingluck was impeached although she was out of office, indicating that the scandal is far from being about simple corruption or the rule of law.

The junta denies it is trying to single Yingluck out.

In addition to cases against Yingluck and senior members of her former cabinet, the military government is investigating some 850 corruption cases related to the rice scheme, government spokesman General Sansern Kaewkamnerd told Reuters.

"Many of the cases involve lower-ranking public officials and members of the private sector," he said.

The current Thai military government is in an uncomfortable position, as any perception of persecution of the Shinawatra family could spark outrage among supporters in rural parts of the country, ruining efforts to build an image of a stable Thailand, worthy of foreign tourism and investment, according to The Diplomat.

000000
Popular comments
She was a US servant who betrayed her own people in order to favor foreign powers and she lectures about injustice?
jas
22 October 2016, 02:27 GMT1
000000
i am Thai myself, but have no clue about Thai Politics. all i know is i'd bang Yingluck.