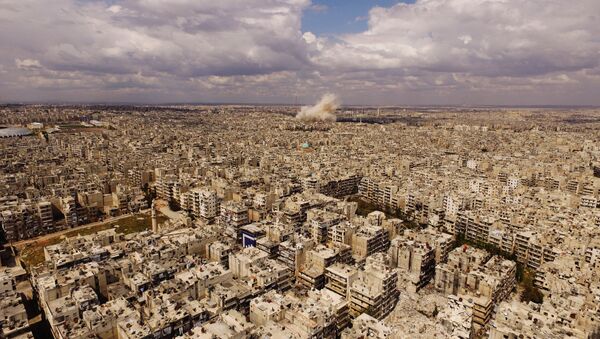 © Sputnik / Mikhail Voskresenskiy
/
Go to the photo bank
Subscribe
Separation between terrorist and moderate rebel groups in Aleppo is crucial for the success of the humanitarian pause which came into effect in the city on Thursday. However, efforts to draw a line between extremists and moderates are facing serious difficulties.

No Civilians, Militants Exited Aleppo Via Designated Routes Overnight
Soon after a humanitarian pause came into force in Aleppo on Thursday a number of violations was reported. For example, pro-government militias said that militants of al-Nusra Front opened fire on a group of civilians who wanted to leave the city via the special humanitarian corridors.

The command of the Syrian Army said that terrorists were blocking residents from leaving eastern Aleppo, including taking hostages and opening fire on civilians.

On Friday, the Russian Defense Ministry reported that all eight humanitarian corridors have been permanently attacked by militants throughout the day.

According to local media, there are differences between militant groups within the city. Some groups are reportedly ready to stop fighting and leave Aleppo while al-Nusra Front and other radical groups want to fight to the end.

Extension of Aleppo Pause to Depend on Situation on the Ground – Kremlin
Russia has insisted that terrorists in Aleppo should be separated from the so-called moderate opposition fighters. Moscow has repeatedly called on Washington to accelerate the process but no significant progress has been made.

"The motive of the United States, the only mission that the US has in Syria, is removing Assad from power," Cohen said in an interview on The John Batchelor Show.

Moreover, he noted that American media has dramatically changed its narrative while covering the situation in Aleppo.

"If you pick up a paper today the narrative is completely different. In Aleppo there are only rebels, there are no longer terrorists. You don't see the word 'terrorist' or 'jihadist' in the narrative any more. And alongside them, with rebels protecting them, there are children who are being killed by Russian and Syrian war planes," the professor said.

It is hard to say whether al-Nusra Front militants will be separated from moderates, but certain scenarios are possible and they are being discussed by the key regional players, said Anton Mardasov, a military expert and senior analyst at the Institute for Innovative Development.

"No doubt, there is bargaining over Aleppo underway between key players who recently held talks in Lausanne, including Iran and Egypt. It was reported that so-called green buses have already been spotted in Syria. They’re used to evacuate militants," Mardasov told the Russian online newspaper Vzglyad.

On October 6, UN Special Envoy for Syria Staffan de Mistura proposed to accompany militants from the Nusra Front jihadist group if they wanted to leave Aleppo with arms and to head for the city of Idlib. In turn, Russian Foreign Minister Sergei Lavrov welcomed the proposal.

There is a likely scenario that al-Nusra Front militants will be evacuated and opposition fighters will join some local militia units, the expert said. He noted that since Aleppo and Idlib are Sunni areas where rebellious sentiments were always popular they will be very difficult to control even after the liberation of Aleppo.

Turkey, Russia Agree on Joint Steps for Withdrawal of Nusra Front From Aleppo
However, this scenario is facing hurdles because it is not in the interests of both Damascus and the West. The Syrian government wants to keep some control of Aleppo. At the same time, rebel groups in Aleppo do not want government forces to strengthen their positions in Aleppo and this is why they are against the separation.

"So, probably, a ceasefire will be reached. During this ceasefire some steps could be made to separate terrorists from the moderates," he suggested.

Previously the US formed in Idlib a new tactic unit comprising pro-American groups. Thus, they were separated from al-Nusra Front.

"Such work is in progress. But it is extremely difficult due to a number of reasons, including ideological tensions and the opposing interests of different groups and players," he explained.

Another scenario is resumption of the military operation after the humanitarian pause, Mardasov said. But the situation is unclear because currently it is unknown how Washington will change its strategy after the presidential election.