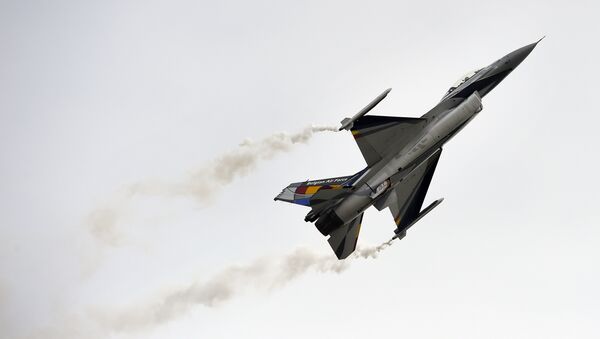 Russian Ministry of Foreign Affairs has summoned Belgian Ambassador Alex Van Meuwen to present him with proof that the Royal Belgian Air Force took part in strikes at the Hassajek village near Aleppo, Syria.

Moscow Expects US-Led Coalition to Decry Deadly Belgian Strike on Syrian Village
"On October 21, Belgian Ambassador Alex Van Meuwen was summoned to Russian Ministry of Foreign Affairs. During the meeting with the Ambassador, Russia's Deputy Foreign Minister Vladimir Titov said that it is puzzling that Belgium is continuing to pesistently deny the fact that the Royal Belgian Air Force performed a strike on the area near Aleppo on October 18, in consequence of which civilians died," according to a statement issued on Friday.

"The Belgian diplomat was presented with proof of the Royal Belgian Air Force's involvement in the bombardment of the Hassajek village. It is stated that detailed information about technical aspects of the flight path of two F-16 jets was sent earlier to Belgium's military attache in Moscow."

Earlier on Thursday, the Russian Defense Ministry released the detailed information about the airstrike on Hassajek, which had resulted in destruction of two houses and deaths of six people.

According to Russian Defense Ministry's spokesman Maj. Gen. Igor Konashenkov, the aircraft that took off from Al-Azraq air base in Jordan have been immediately identified to be F-16, and their affiliation was established as that of the Belgian Air Force.