No-Belles at Nobel This Year, But Not for Lack of Contenders 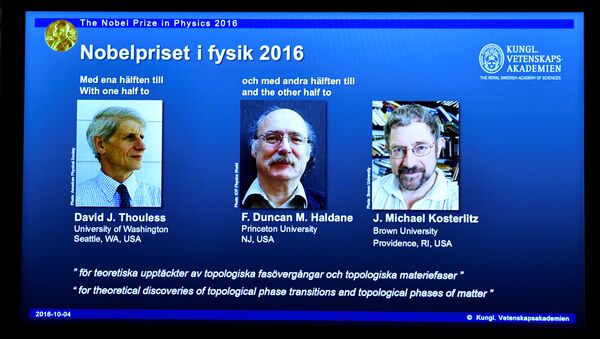 © REUTERS / Anders Wiklund
Subscribe
The gender gap at Nobel Prize awards looked like it was gradually improving, until the 2016 prize winners were announced. Not one female candidate made it to the winners list, and despite some very strong contenders this year.

Since 1901, there is said to have been well over 800 male winners of the Nobel Prize, but just 47 female winners in total. And that measly figure hasn't increased in 2016.

The Peace Research Institute Oslo (PRIO) conducts research on the conditions for peaceful relations between states, groups and people.

Bob Dylan Awarded Nobel Prize in Literature - Swedish Academy
Based on independent assessment, PRIO Directors have offered their personal shortlist predictions for the Nobel Peace Prize each year since 2002. This year they actually featured a prominent list of female peacemakers fighting the cause for global harmony, but not one made the final announcements.

Svetlana Gannushkina from Russia was a firm favourite for her efforts in standing up for the rights of migrants worldwide, including advocating for refugees and asylum seekers in her home country.

Jeanne Nacatche Banyere and Jeannette Kahindo Bindu in Congo are two outstanding individuals who have committed themselves to the fight against sexual violence. Fondly referred to as 'Mama Jeanne and 'Mama Jeannette', the two women have been seeking out survivors of sexual violence all across the country, and providing much support where required.

Other prominent contenders according to the PRIO predictions this year included Emilia Kamvisi, who along with two other women in Greece was seen as a symbol of the Greek islanders' assistance to the boat refugees.

Hollywood actress Susan Sarandon was also tipped for her efforts in Greece, choosing to spend Christmas time to help displaced individuals on the ground.

Nadia Murad Basee Taha,who was previously held as a sexual slave by Daesh, was also suggested as a prominent contender deserving of her efforts in speaking for peaceful resolves in the world.

Critics have largely argued that the Nobel Prize awards panel needs to include more women as part of the decision making process.