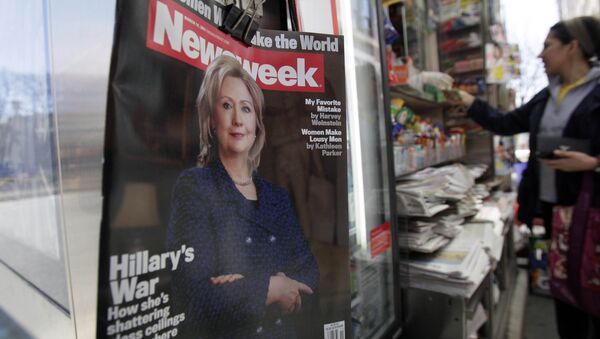 The journalist who wrote the debunked Trump-Putin conspiracy theory - and was exposed by Sputnik of admitting to being fed the story to malign the candidate by US intelligence officials - has updated, instead of retracting, his story. After which he had a complete breakdown on Twitter and threatened to use Newsweek’s lawyers against Sputnik.

In an update to the widely-discredited story, Kurt Eichenwald has doubled down on his conspiracy theory. He is also now attacking former Sputnik writer and editor, Bill Moran, who revealed he was offered a job with New Republic in exchange for his silence on the Newsweek story being false. 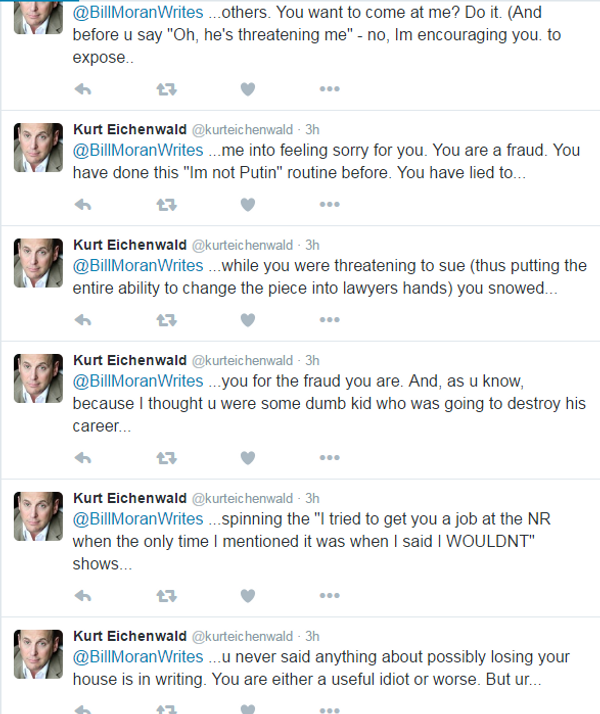 “William Moran, the writer for Sputnik, said he based his article not on directives from the Russian government but on an anonymous tweet he saw on the internet that used an altered image of the document. He said he accepted the anonymous tweeter’s description that this was from Blumenthal, and did so because he was rushed,” Eichenwald wrote, correctly. Moran’s contract with Sputnik was terminated, though he was later offered his position back once he explained how the blunder happened.

Newsweek Journalist Claims US Intelligence Fed Him False Putin-Trump Conspiracy
But in the next sentence Eichenwald doubled down on his ridiculous claims.

“However, as the government official with knowledge of the intelligence inquiry said, the original altered document that was tweeted onto the internet came from a location that has been identified as being connected to the Russian disinformation campaigns, and only the news outlet controlled by the Russian government published an article based on it,” Eichenwald stated.

Eichenwald has also verified the validity of his emails to former Sputnik writer and editor Bill Moran to Paste Magazine.

“Paste reached out to Eichenwald, and in a long and frustrating conversation, he repeated the claim that even if Moran wasn’t himself a Russian agent, he was the unwitting pawn of Russian agents. At one point, he said, ‘Whoa, whoa, whoa, I never said I’d help him out with a job,’ before enumerating how he did exactly that,” Paste reported. 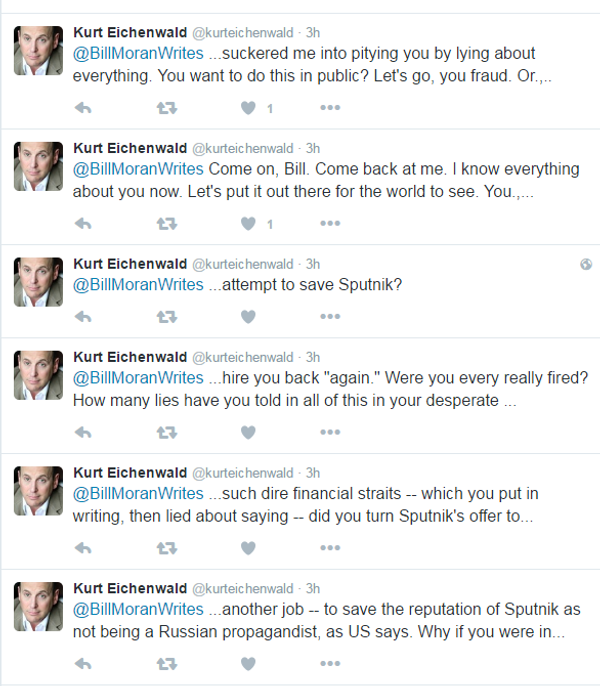 The day after the Paste article broke, Eichenwald took to Twitter to launch an unhinged threat campaign directed at Moran. Over the course of approximately 45 minutes, Eichenwald tweeted at or about Moran 78 times. The tweets ranged from accusations that Moran is a fraud, to crying about how he (Eichenwald) is just a “nice guy” who felt sorry for Moran (after he cost him his job by running a bogus story), to threatening to use Newsweek’s lawyers against Moran and Sputnik News.

“Dont think this is ending here. I know what u are and I know what Sputnik is.’” Eichenwald threatened.

Moran tagged Newsweek into the conversation, saying that he hopes the national news magazine is seeing how off-the-rails their journalist has gone.

In response, Eichenwald stated that he had a meeting with Newsweek regarding the issue this morning, and that the magazine is prepared to take Moran on, “and Sputnik too.”

Newsweek has still not responded to Sputnik’s request for comment.