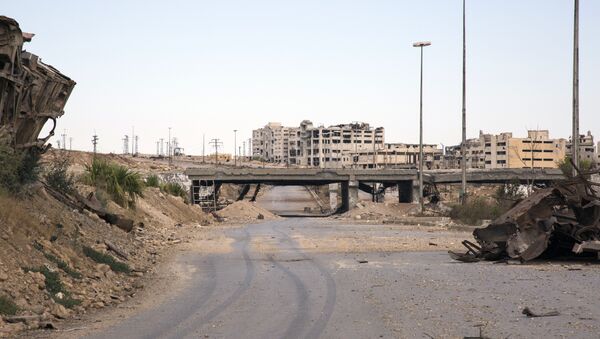 A RIA Novosti correspondent reported that militants have shelled Syrian army positions near the Castello road in Aleppo.

Hundreds Stage Protest in Aleppo Demanding Militants Let Them Leave – Source
Castello Road is one of the exits that should be used for evacuation of civilians and militants who want to leave eastern Aleppo controlled by terrorists.

The attack began several minutes before the humanitarian pause ended.

Al-Nusra Front Terrorists Open Fire at Civilians Leaving Aleppo - Militia
A humanitarian pause in Russian and Syrian airstrikes on terrorist positions came into force in Aleppo earlier today. It will last until 7:00 p.m. local time (16:00 GMT). Civilians are encouraged to leave the war zone through six corridors, while two others are reserved for militants willing to lay down their arms.