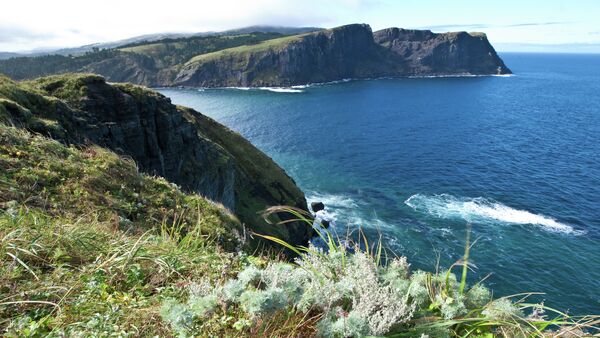 Putin's Japan Visit Could Offer Overdue Chance to Resolve Kuril Island Issue
According to the report, Tokyo is considering recognizing two of the four disputed islets as belonging to Russia.

It was also reported that prior to the December visit by Russian President Vladimir Putin to Japan, Tokyo is revising its strategy on the issue, in an attempt to overcome a deadlock in the negotiations with Russia. The Japanese government may offer a major concession to Moscow, including handing over the two smaller islands to Moscow.

According to Kyodo, Tokyo is ready to become more flexible on the issue and will not insist on Moscow’s recognition of Japan’s sovereignty over the islands.

However, the Japanese Foreign Ministry quickly rebuked the claims, underscoring that the government had not changed its stance on the issue.

Japan Using Kurils as 'Screen' to Improve Ties With Russia Behind US' Back
Many experts say that despite loud headlines in media, in fact Moscow and Tokyo have not managed to bring closer their views of the problem. The overall situation reflects the positions described in the 1956 Joint Declaration between Japan and the Soviet Union.

It would be premature to talk about any breakthrough steps towards the settlement of the dispute, said Dmitry Streltsov, an expert in international relations and specialist in Japanese studies.

"The leaders of both countries are keeping the situation in suspense. Such an approach is reasonable because exciting the public opinion before an official visit makes no sense. However, media keeps speculating. If any the official decision will be announced only after the talks between Putin and Japanese Prime Minister Shinzo Abe," Streltsov told Sputnik Japan.

However, the expert suggested, no surprising or extraordinary decisions will be made during the meeting.

"At the same time, certain small steps and actions towards the settlement of the problem are possible," he added.

The relations between Russia and Japan have recently been re-energized. In September, Abe took part in the Eastern Economic Forum in Vladivostok, during which he held three-hour talks with the Russian president. One of the outcomes of the meeting was the announcement of Putin's visit to Japan on December 15, which had been postponed from 2014.

Japan and Russia never signed a permanent peace treaty after World War II due to a disagreement over four islands which Russia calls the Southern Kurils and Japan the Northern Territories: Iturup, Kunashir, Shikotan and Habomai.