Syrian Army to Clear Aleppo of Militants After Humanitarian Pause 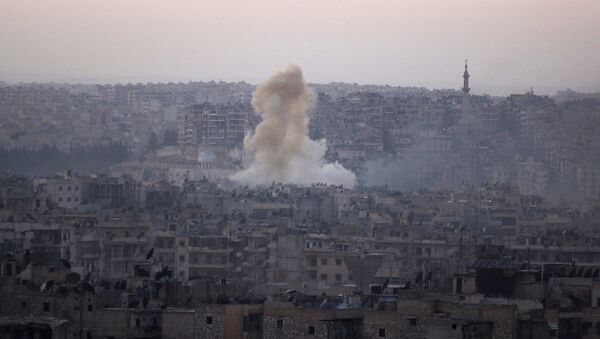 An eleven-hour-long humanitarian pause came into effect in the Syrian city of Aleppo on Thursday. During this time, armed terrorists are allowed to leave the besieged city.

Heavy fighting have been underway in and around Aleppo since Syrian government forces began a major offensive on the rebel-held eastern districts after the collapse of the ceasefire brokered by Russia and the United States in early September.

The current humanitarian pause is an opportunity for civilians to leave the combat zone. It is also the last chance for terrorists to leave the city, Russian senator Franz Klintsevich said.

"This ceasefire creates the possibility for civilians to leave the combat zone. Terrorists will have the same opportunity. After the humanitarian pause the city is cleansed from militants. But it will be very difficult to accuse Russia of ignoring the interests of civilians," the lawmaker pointed out.

In turn, Syrian lawmaker Jamal Rabia also confirmed the plan to cleanse the city from terrorists after the humanitarian pause.

"Russia has put forth many efforts to find a peaceful resolution to the Syrian conflict. But now it’s obvious that the US and its allies are not interested in such a scenario. The current ceasefire will be the last possibility for militants to leave the city. The following cleansing of the city is a military solution, but it will pave the way for talks to resolve the conflict," he told Izvestia.

De Mistura Praises Russia-Backed Humanitarian Pause in Aleppo
Initially, it was planned that the humanitarian pause in Aleppo would start at 8:00 a.m. local time and last until 4:00 p.m. However, on Wednesday, Lt. Gen. Sergei Rudskoy, chief of the Russian General Staff's Main Operational Directorate, announced that the humanitarian pause would be extended for three hours, to 7:00 p.m. local time. He explained that the extension was in response to requests from international organizations.

In turn, Russian Defense Minister Sergei Shoigu said on Tuesday that the Russian and Syrian air forces had halted sorties around the besieged city in preparation to Thursday’s humanitarian pause.

The minister underscored that by the beginning of the humanitarian pause Syrian forces will be withdrawn from the city to secure the passage of armed militants along two designated routes, including the Castello road. In addition, six corridors will be organized for civilians leaving the combat zone.

All Conditions to Evacuate Civilians, Injured From Eastern Aleppo Created
However, some military groups have already said they would not leave Aleppo and would fight until the end. Meanwhile, it was also reported that on October 19, separate units of over 150 militants of Ahrar al-Sham left the city by an agreement with the Syrian Army.

The plan to clear Allepo from terrorists after the humanitarian pause was earlier announced by Syrian President Bashar Assad.

Russian experts predict a negative response from the West on the plan to clear Aleppo from terrorists after the humanitarian pause. However, the Russian Foreign Ministry and the Defense Ministry has repeatedly underscored that Russia launched its campaign in Syria at the request from the Syrian government, unlike a US-led international coalition.