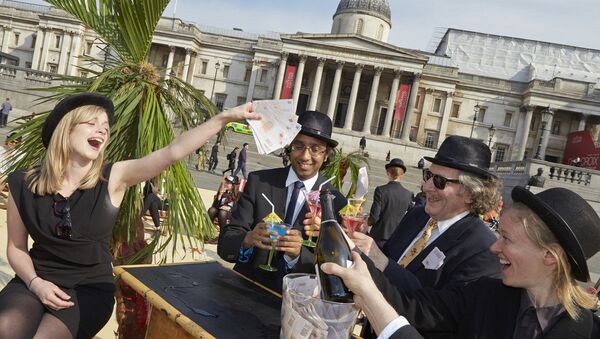 © Photo : Andy Hall/Oxfam
Subscribe
The UK's failure to convince its overseas territories and crown dependencies to improve their financial transparency, along with the existence of its own loopholes, is "significantly hindering efforts to curb global corruption," British MPs have warned.

In a new report, the UK's International Development Committee (IDC) accused the UK of squandering an opportunity to act on the issue of corruption and financial secrecy earlier this year when the government hosted an anti-corruption summit in May.

The Government must take action at home and overseas to tackle #corruption. Read our Report: https://t.co/WWPeNopW6G #UKaid

​The summit came just after the release of the Panama Papers, which consisted of millions of leaked documents that revealed the many ways in which businesses were using elaborate business structures to avoid paying tax, with some of the UK's overseas territories featuring heavily in the reports.

'UK Should Get Its House in Order'

While noting that the UK has taken steps over the past six years on the issue of corruption, MPs said the lack of financial transparency employed by Britain's overseas territories was damaging the country's reputation in regards to the matter.

"The IDC has previously called on the UK Government to get its own house in order. This remains the case. Ministers must address the role of some UK companies and individuals in facilitating global corruption, including the vast amounts of money laundered through the UK," chair of the committee, MP Stephen Twigg said.

​Chief among the recommendations put forward by the committee was the creation of a public register of beneficial ownership for companies, which has so far been rejected by Britain's overseas protectorates.

The Panama Papers revealed the central role the UK played in facilitating global corruption, with approximately half of the companies included in the leaks — more than 113,000 — registered in the UK overseas territory of the British Virgin Islands.

​However, closer to home there were more questions about the UK's actions, with Professor Paul Heywood from the University of Nottingham telling the committee that the role of the financial sector in the City of London "in allowing corrupt money to flow should not be underestimated."

According to OECD estimates, US$240 billion (£195bn) in tax revenue is lost each year due to tax avoidance, with MPs saying that the world's poorest were among those hardest hit.

"Huge amounts of money are lost every year through illegal tax evasion, money laundering and bribery. The people most at risk from this scourge are the world's poorest, who lose out on education, healthcare and infrastructure; not to mention the impact of petty corruption on their daily lives," Twigg said.

Panama Papers: half the 214,000 companies, contained in leaked data from the internal files were registered in the British Virgin Islands.

​The committee also addressed current issues facing the UK, saying Britain should not take Brexit as an excuse to further relax taxation and financial transparency rules.

"It is essential that momentum is not lost in the wake of the decision to leave the European Union, when laws, regulations and trading arrangements are reviewed," the report said.