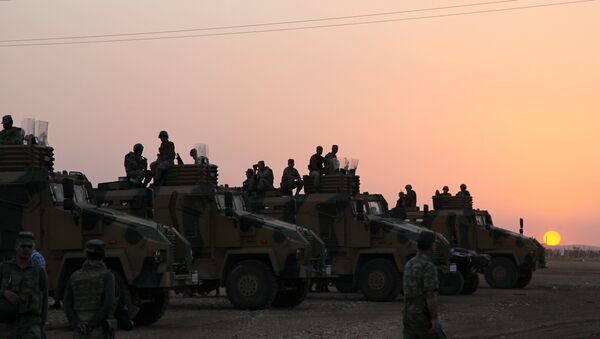 ANKARA (Sputnik) — Turkish forces have destroyed 64 Daesh facilities in the past 24 hours as part of the Euphrates Shield operation in northern Syria, the Turkish General Staff said Wednesday.

"Our Armed Forces, have hit 64 Daesh targets using Firtina howitzers, multiple rocket launchers, tanks and mortars. The Free Syrian Army (FSA), supported by the Turkish Armed Forces, has gained control over five more settlements between Azaz and al Rai. During the operation, three FSA soldiers have been killed and six injured," the General Staff said in a statement.

Syrian Kurds 'Swallowed Washington's Bait' but They Are Just a Pawn in US Hands
Overall, a total of 155 settlements in northern Syria have been liberated from terrorists since the beginning of the operation in late August, it added.

On August 24, Turkish forces, backed by US-led coalition aircraft, began a military operation dubbed Euphrates Shield to clear the Syrian border town of Jarablus and the surrounding area of Daesh, outlawed in Russia and many other countries. As Jarablus was retaken, the joint forces of Ankara, the coalition and Syrian rebels continued the offensive southwest.