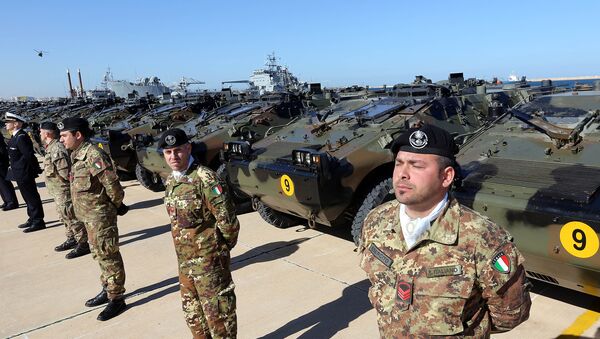 Italy is going to deploy its troops along Russia's borders. That would be funny if it weren't so sad, especially given the fact, that in 2018 Italy will be taking over the command of NATO’s Rapid Reaction Force in the Baltic.

Italy 'No Longer Sovereign State, It is on NATO's, US' Tight Military Leash'
The decision to deploy 140 Italian troops in Latvia was taken by the NATO summit in Warsaw in July, but Italian Defense Minister Roberta Pinotti obviously took her time admitting this.

In an interview with Sputnik, Italian military expert and observer with Analisi Deifesa and Libero journals, Mirkio Molteni, said that the Italian government had taken three months to admit this and had used the 50th anniversary of a military college in Rome as a pretext to ask NATO Secretary General Jens Stoltenberg to bring the news to the Italian people.

“Various opposition parties are protesting against this and with good reason too, but the government just pretends that everything is all right. What is happening, really? Has Italy declared war on Russia?” Mirkio Molteni wondered.

He mentioned repeated statements by Rome that it wanted to maintain a dialogue with Russia, but in fact it looks like Italy is simply taking orders from NATO and the United States.

“What makes this news so bad is that, first, it proves that Italy is not an entirely sovereign state and, secondly, this is putting Italy, which has always been a good friend of Russia, on a collision course with Moscow,” Molteni noted.

“It looks like NATO is pushing Italy to deploy its troops in the Baltic countries even though our interests have traditionally been in the Mediterranean and it would only be logical to use our forces there,” he added.

He said that Italian Prime Minister [Matteo Renzi] should have brought the issue before parliament.

“Does it mean that Italy still remains a second-class ally to the US and must implement the secret protocols of the 1950s, like the Bilateral Infrastructure Agreement (BIA) signed in 1954?”

“I hope the Russian government realizes that Italy has been forced to act this way, just like everyone knows that NATO-Russia relations largely depend on the outcome of the presidential elections in the United States,” Mirkio Molteni emphasized.