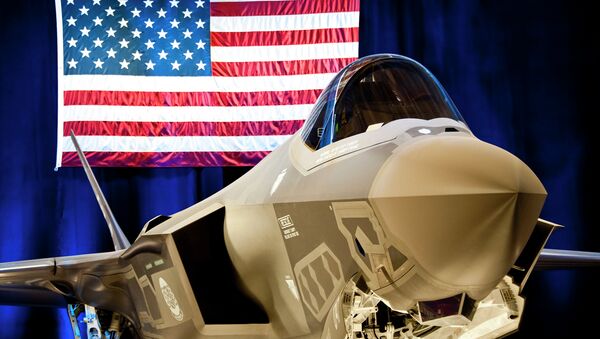 While US taxpayers have already spent over $1 trillion on the F-35 Joint Strike Fighter (JSF) program, US lawmakers are fighting to include even more funding for the controversial aircraft in next year’s budget.

While both defense-policy and defense–spending bills for fiscal year 2017 are currently stalled, the US Congress hopes to increase F-35 procurement. The House appropriations bill would add five F-35As, two F-35Bs, and four F-35Cs, while the Senate bill would add four F-35s.

The Senate bill would also approve $100 million for additional procurement 2018.

"Increasing the production rate is the single most important factor in reducing future aircraft unit costs," reads a letter signed by over 70 lawmakers to House Defense Appropriations Subcommittee Chairman Rodney Frelinghuysen, according to Defense News.

"Additionally, significantly increasing production is critical to fielding F-35s in the numbers needed to meet the expected threats in the mid-2020s."

Lawmakers argued that global instability requires a faster roll out of the aircraft.

"Events around the globe continue to demonstrate the urgent need for the F-35’s capabilities," the letter reads.

"The program is gaining momentum with the Marine Corps declaring initial operating capability last year and the Air Force declaring IOC [initial operating capacity] this summer. We believe it is essential for Congress to provide the funding necessary to continue increase F-35 production at a rate sufficient to meet future threats and to reach at least 120 US aircraft per year as quickly as possible."

Multiple reviews have shown the beleaguered fighter to be less effective than its predecessors in air combat.

"[I]t is clear the JSF will be dead meat if it ever comes to close range combat with decades-old fighters," Australian Federal Parliament member Dr. Dennis Jensen wrote last August.

The fighter has also faced multiple technical difficulties. Most recently, officials expressed concern over the F-35A’s ejector seat, which could be a danger to pilots weighing less than 165 pounds. The US Navy is also experiencing difficulties with the helmet of its F-35C variant, the only model not yet deemed combat-ready. Tests have shown that the helmet’s ambient "green glow" is blinding pilots during night carrier landings.

"On a dark night it skewers outside light reference for pilots. A pilot cannot pick up the lights on the carrier as well as he’d like to, he doesn’t necessarily pick up non-lighted signals on the ship as he taxiing around, he has a harder time picking out aircraft that are flying around."