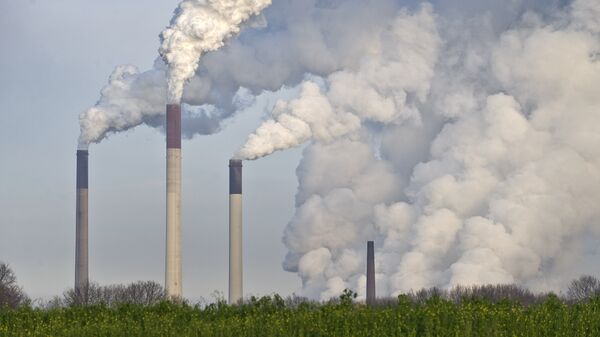 © AP Photo / Martin Meissner
Subscribe
Scientists at the US Department of Energy’s Oak Ridge National Laboratory (ORNL) have developed a technology that turns carbon dioxide into ethanol, according to a study published in the Chemistry Select journal in September.

The discovery was made during an electrochemical process of reversing combustion, using copper and carbon nanospikes. The scientists were attempting to turn carbon dioxide, a waste byproduct of burning fossil fuels, into an organic element, when they realized that the first step of the experiment did the entire job.

"We discovered somewhat by accident that this material worked," said ORNL's Adam Rondinone, lead author of the study. "We were trying to study the first step of a proposed reaction when we realized that the catalyst was doing the entire reaction on its own."

Voltage was applied to a carbon, copper and nitrogen catalyst, to induce a chemical reaction of reversing the combustion process. The yield of ethanol obtained by the solution of carbon dioxide in water appeared to be about 63 percent. The researchers now suggest that there is a possibility that the process could "go straight from carbon dioxide to ethanol with a single catalyst."

Burning Fat for a Better World: Finns to Convert Grease Waste Into Diesel Fuel
"By using common materials, but arranging them with nanotechnology, we figured out how to limit the side reactions and end up with the one thing that we want," Rondinone said.

The scientists hope that the process could be used in other applications.

"A process like this would allow you to consume extra electricity when it's available to make and store as ethanol," Rondinone said. "This could help to balance a grid supplied by intermittent renewable sources," according to the ORNL website.