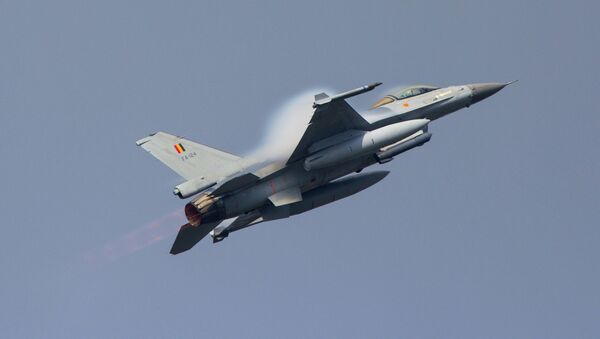 © Flickr / Clemens Vasters
Subscribe
International
India
Africa
The Russian Foreign Ministry expects an "adequate" reaction of the US-led coalition to the airstrikes on a Syrian village committed by the Belgian air force.

"We are waiting for an adequate response from the coalition, of course from Belgium, from all international institutions that are so concerned about attacks on Aleppo carried out by the Russian Aerospace Forces, including the attributed civilian casualties," Zakharova told reporters.

Russian Foreign Ministry Expects US to Condemn Airstrikes on Syrian Village
The Russian center for Syrian reconciliation said Tuesday it had received local reports of an airstrike on the village of Hassajek near Aleppo that killed six people and wounded at least four. Two Belgian Air Force F-16 jets had been detected in the area at the time of the strike.

Zakharova stressed that she fails to see how "this fact could go unnoticed."

"If we do not have direct condemnation of the coalition's actions, particularly that of the Belgian Air Force, we will have no other option than to consider what is happening now as an attempt to keep the militants in Syria," Zakharova said.

Unacceptable Not to Use Humanitarian Pause in Syria for Intended Purpose

Russia Prepares Draft Statement on Separating Opposition, Terrorists in Syria
It is unacceptable not to take advantage of an announced humanitarian pause in Syria to ease the plight of the local population, Zakharova said.

"The situation in which this pause will not be used for its intended purpose, namely to facilitate the solution of the humanitarian situation, is unacceptable," she told reporters.

The announcement on the humanitarian pause for Aleppo was made on Monday by chief of the Russian General Staff's Main Operational Directorate Lt. Gen. Sergei Rudskoy. On Tuesday, Russian Defense Minister Shoigu said the Russian Aerospace Forces and the Syrian Arab Air Force stopped airstrikes in the vicinity of Aleppo starting 07:00 GMT ahead of the humanitarian pause.