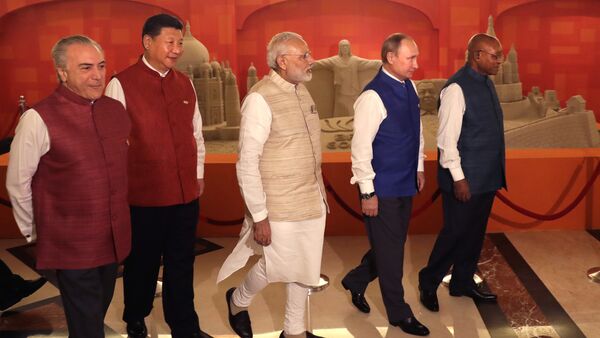 While BRICS Supports Moscow, Angry Western Rhetoric on Syria Keeps on Flowing
In an interview with Sputnik, Alissa Wang, the chair of summit studies for the BRICS Research Group at the University of Toronto, praised the BRICS countries' role in grappling with "crucial global challenges."

The interview came after Russian Deputy Foreign Minister and Russia's BRICS Sherpa Sergey Ryabkov said that Moscow is satisfied with the BRICS final declaration as it reflects many political issues important for Russia.

He said that the Goa declaration set clear support for Russia's initiative to work out a convention prohibiting chemical and biological terrorism. In addition to this, the declaration cited the unacceptability of unilateral sanctions.

Speaking to Sputnik, Alissa Wang said, for her part, that the BRICS summit was successful "both in broadening its agenda and its outreach."

"So overall I would say that the BRICS summit made a significant contribution to solving crucial global challenges from the perspective of emerging economies; the summit also truly consolidated the BRICS position as the global governance institution in the international scene," she said.

Wang added that the BRICS role on the global stage is closely related to its size and representation given that the group's member countries contain half of the world's population.

"With many ongoing tensions and instability in the modern-day world yet to be resolved, the BRICS has such a crucial role to play in global problem solving," she added.

She also drew attention to the fact that the BRICS is not trying to replace or challenge existing institutions, including the G20; instead, they try to supplement each other, she said.

"The cooperation between the BRICS and the G20 is of great importance to resolving key international challenges," Wang pointed out, adding the G20 is seen as a bridge between developed and developing nations.

How the BRICS Can Help End War in Syria and Establish a New, Just World Order
The BRICS joint declaration was signed by the group’s member-states on Sunday. The document offers a multilateral vision of the world, where regional and local trade deals are only a supplement to the larger framework of the World Trade Organization.

It also outlines the group's stance on the issue of fighting terrorism, providing for a joint working group on counter-terrorism and calling on all nations to facilitate the adoption of a comprehensive convention on the matter.

As for the Syrian crisis, the declaration calls for an inclusive Syrian-led political process and reforms of the UN and the Security Council.
BRICS is the association of five developing economies of Brazil, Russia, India, China and South Africa. This year they held the eighth annual BRICS event in India's Goa.