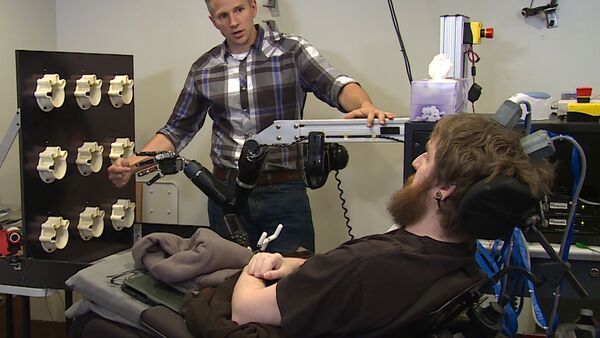 In the winter of 2004, 28-year-old Nathan Copeland suffered an accident that left him unable to feel any sensation in his arms and fingers. But a decade later, he has now been able to regain his sense of touch through a mind-controlled robotic arm that is directly connected to his brain.

In a study published in Science Translational Medicine, a team of experts led by Robert Gaunt, assistant professor of physical medicine and rehabilitation at Pittsburgh University, for the first time ever demonstrated in humans, technology that allows Mr. Copeland to experience the sensation of touch through a robotic arm that he controls with his mind.

According to the study, the system developed by the team of researchers fully bypasses Mr. Copeland's natural sensory pathway, which had been severed in his accident. It transmits electrical signals directly into his sensory and motor cortices which enables him to not only feel when something presses against the robotic hand but also control the mechanical arm using only his thoughts.

Even US President Barrack Obama has been impressed with the work of the team, as he got to shake hands with the robotic arm controlled by Mr. Copeland.

In a press release issued by the University of Pittsburghs' Medical Center, study co-author Andrew B. Schwartz, said:

"The most important result in this study is that microstimulation of sensory cortex can elicit natural sensation instead of tingling. This stimulation is safe, and the evoked sensations are stable over months."

The team of researchers at Pittsburgh Medical Center developed and refined their system for inputs from the robotic arm to be transmitted through a microelectrode array implanted in the brain, where the neurons that control hand movement and touch are located. The microelectrode array and its control system, which were developed by Blackrock Microsystems, along with the robotic arm which was built by the Johns Hopkins University Applied Physics Laboratory, formed all the pieces of the puzzle.

Speaking after his brain surgery and the process of being able to feel after a decade of not having been able to do so, Nathan Copeland told doctors:

"I can feel just about every finger — it's a really weird sensation. Sometimes it feels electrical and sometimes its pressure, but for the most part, I can tell most of the fingers with definite precision. It feels like my fingers are getting touched or pushed."

According to doctors involved in the study, Mr. Copeland is said to be able to feel pressure and distinguish its intensity to some extent, but as of yet is unable to identify whether a substance is hot or cold.

Professor Michael Boninger, who is the professor of physical medicine and rehabilitation at Pittsburgh Medical Center, recounted how the team has been able to achieve their latest milestone, from a basic understanding of how the brain processes sensory and motor signals and applying it in patients.

"Slowly but surely, we have been moving this research forward. Four years ago we demonstrated control of movement. Now the team is taking what we have learned in our tests and showing us how to make the kind of robotic arm to allow its user to feel again," said Professor Boninger, who is also a co-author on the research paper.

Although the advancements in this research study are a step in the right direction, it may take some time before paralyzed patients elsewhere will be able to use brain implants to feel touch through a robotic prosthetic.

Scientists still don't fully understand how electrical stimulation of the sensory cortex corresponds to the sense of touch and much more research is still needed.