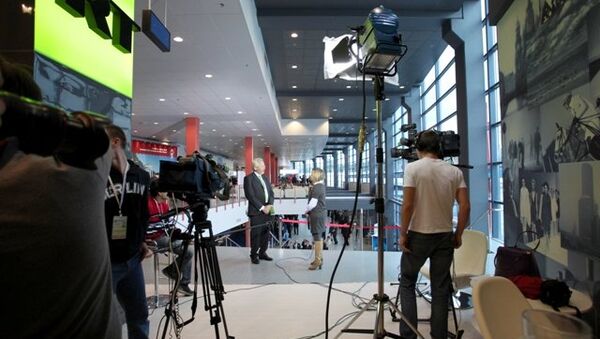 © Nachrichtensender RT
Subscribe
The RT broadcaster will not give up and will do everything in its power to continue operating in the United Kingdom after it blocked its accounts, RT Editor-in-Chief Margarita Simonyan said Monday.

OSCE Freedom of Media Office Closely Following Case of Blocking RT's Accounts
MOSCOW (Sputnik) – Following Simonyan's statement on Twitter earlier in the day, RT UK said it had been informed by the National Westminster Bank that it "will no longer provide" banking arrangements with the broadcaster.

"Our lawyers are doing it right now. We intend to find other ways to continue our work in the United Kingdom and we shall not give up, we shall do everything to preserve out broadcasting and so that our audience continues to receive information, some kind of alternative information on what is going on in the world," Simonyan told reporters.