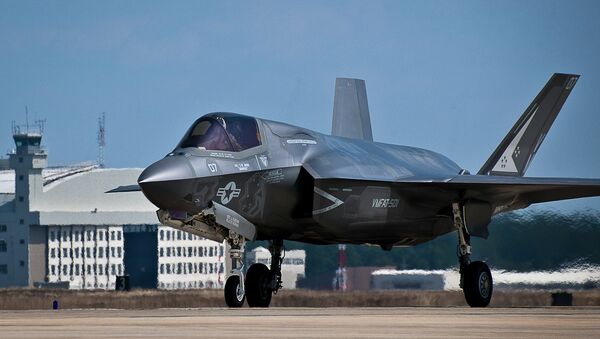 © Flickr / Samuel King Jr
Subscribe
Norway will be first among international partner nations to participate in a multiyear F-35 fighter jet purchase, and will request an additional 12 “block buys” of the war plane in 2019 and 2020.

In its budget proposal for 2017, Norway's Defense Department told the country's parliament of its plan to order 12 additional fifth-generation stealth fighters. "They continue to stay strong in the program and it shows the confidence they have in the F-35," said Ken Ross, a spokesman for Lockheed Martin in Fort Worth, Texas, where the airplane is built.

"Norway and other international partners on the F-35 program have been involved in the concept of a block buy since its inception," said Joe DellaVedova, a Pentagon spokesman for The F-35 Joint Programme Office (JPO). "Due to vast economies of scale, all countries will achieve significant reductions on the price of their jets."

The JPO must take into consideration US government policies that restrict a "multi-year procurement" unless a weapons program completes initial operational test and evaluation. In fact, the completion of the F-35 is not due until at least 2018. The Government Accountability Office reported in April that the F-35 program "has around 20 percent of development testing remaining, including complex mission systems software testing," according to Military.com.

US Military Says Beleaguered F-35 Issues To Be Resolved By Year’s End
Norway first bought the fighter jet in September 2015. But after discovering "peeling and crumbling" insulation inside of avionics cooling lines in the fuel tanks, the US Air Force and Norway stopped flight operations for 15 Joint Strike Fighter aircraft. According to a 2015 Air Force statement, the defect was discovered during an F-35A conventional-take-off-and-landing variant depot modification.

Norway is one of eight partner nations buying what is the most expensive weapon system ever built. Among nations participating in the development of the F-35 are Australia, Canada, Great Britain, Denmark, Italy, the Netherlands and Turkey. Japan and South Korea, along with Israel, are foreign military customers.

000000
Popular comments
Smart move Norway you must have missed the memo on the f-35 doesn't like and can't fly in the cold.