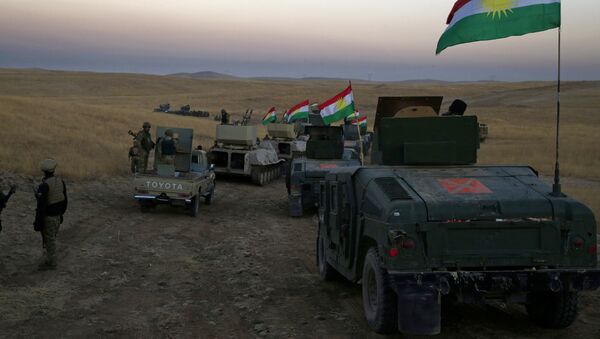 As the Kurdish Peshmerga forces and the Iraqi army launch an offensive on the northern Iraqi city of Mosul, currently occupied by Daesh terrorists, experts predict that it might be even more of a blood bath than the fight for Aleppo and explain what consequences it might have for Syria.

Kurdish Militia and Iraqi Army Start Large-Scale Operation on Mosul
The General Command of Peshmerga has announced that the Kurdish Peshmerga forces and the Iraqi army launched an offensive on the Daesh terrorist-occupied northern Iraqi city of Mosul on Monday at about 03:00 GMT.

Said Mamuzini, a representative of the Kurdistan Democratic Party (KDP), one of the main Kurdish parties in Iraqi Kurdistan, told Sputnik earlier that a corridor will be left for terrorists to escape to Syria. Those retreating this way will not be captured. Currently, there are some 7,000 Daesh militants.

A similar view was echoed by the news website EurAsia Daily, which also says that the US and Saudi Arabia are planning for the "transfer" of Daesh militants from Iraq to Syria.

Citing military-diplomatic sources in Moscow, the website says that the Iraqi government forces will provide for the secure transfer of jihadists to the Syrian city of Deir ez-Zor.

"The key players in the large-scale operation are the US military command in the Middle East and the Saudi General Intelligence Department. The latter plays a special role, given the high number of nationals of the largest Arab monarchy fighting under the black flag of the self-proclaimed Caliphate on the Iraqi frontlines," it says.

Mosul Operation to Include a 'Corridor' for Daesh Terrorists Fleeing to Syria
The outlet notes that the head of the US Central Command (CENTCOM), General Joseph Votel, already indirectly confirmed the above plans when he said that there is "the need to avoid the rush and to combine military and political plans for the liberation of Mosul."

"It is easy to guess what is meant by this 'military-political combination'," the website says.

It further explains that the arrival of fresh Daesh forces into Deir ez-Zor will create more problems for the Syrian government, Russia and Iran in this area of the front line.

It also suggests that in order to avoid being targeted by Russian airstrikes, the Daesh militants might use their family members as a human shield and will later accuse Russia of "humanitarian barbarism." Under such a scenario, this operation might even be more of a blood bath than the fight for Aleppo.

"In fact, the US started preparing a new breeding ground for the Mosul branch of Daesh in Deir ez-Zor in the middle of September. The US airstrike on Syrian army positions, which has been presented as a 'mistake', perfectly fits into the 'combinatory' logic of Pentagon," the website says.

One of the far-reaching aims of the Mosul operation, it suggests, is to drive the Syrian government forces from the east of Syria and to break into the province of Homs. The terrorists might also attempt to recapture Palmyra.

"The 'jihadist transfer' from the Iraqi metropolis into Syrian Deir ez-Zor might become a key point of the 'reply' to the Russians from the outgoing US administration," the website finally says.