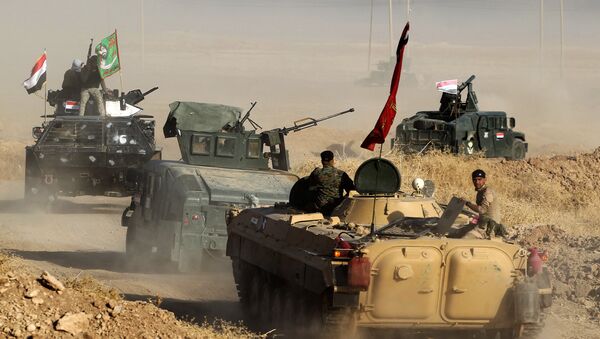 More than half-a-million children and their families in Iraq’s city of Mosul will face extreme dangers as the operation to liberate the city from Daesh have begun, United Nations Children's Fund’s representative in Iraq Peter Hawkins said in a press release on Monday.

WASHINGTON (Sputnik) — "Mosul’s children have already suffered immensely over the past two years," Hawkins stated. "Many could be forcibly displaced, trapped between fighting lines, or caught in the cross fire."

The release noted that UNICEF has prepared enough water, showers, latrines and hygiene kits for over 150,000 people, and hopes to have supplies for 350,000 over the next few weeks.

US-Led Coalition Attacks 17 Daesh Positions to Aid Peshmerga Offensive on Mosul
UNICEF has teams ready to take care of children with the most critical mental and physical trauma, as well as teams to start vaccination campaigns for polio and measles, the release added.

Earlier on Monday, Iraqi Prime Minister Haider Abadi announced the start of the military operation to retake Mosul from Daesh militants. Iraqi troops and their allies, including local Sunni militias and the US-led coalition against Daesh, are involved in the offensive.

The Islamic State, also known as Daesh in Arabic, is a designated terrorist organization and is outlawed in Russia and numerous other countries.