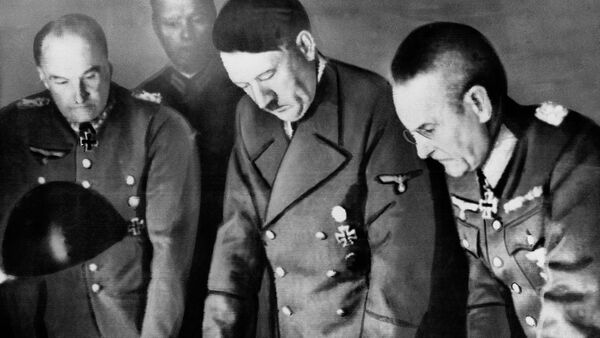 © AP Photo
Subscribe
International
India
Africa
Vienna said on Monday that they will tear down the house where Adolf Hitler was born, and replace it with an as-yet-unannounced structure, as it has become a popular spot for neo-Nazis.

How a Harmless Frog Became a 'Nazi Symbol': Pepe’s an Issue in US Election
While the demolition plan must be formally voted on in Parliament, it is expected to pass with no dissent.

"A thorough architectural remodeling is necessary to permanently prevent the recognition and the symbolism of the building,” Interior Minister Wolfgang Sobotka said of the recommendation that the house be destroyed.

In the statement, ministry spokesman Karl-Heinz Grundboeck stressed that a new structure, with no ties to Hitler, be erected in its place. The commission recommending demolition believes that leaving the site empty could be perceived as a "denial of Austrian history."

The government had been struggling with the current owner to obtain the property in the town of Braunau am Inn, as she adamantly refused to sell the building or renovate it to diminish the symbolic appeal to neo-Nazi visitors. This year, the government launched a formal effort to claim eminent domain and expropriate the home, and the Interior Ministry plans to finalize a draft law which will allow them to seize the house by the end of the year.

Once Bitten, Twice Shy: Ikea Removes Controversial 'Hitler Boy' Ad
While anti-Nazi groups and Jewish community leaders support the plan to raze the three-story yellow house, historians have argued that there are only a few structures left linked to Hitler, and that it should therefore be preserved.

In 1983, then-mayor of the town of Braunau am Inn, Hermann Fuchs, offered to place a memorial tablet directly on the house. The owner refused the questionable honor, explaining that a plaque would draw unwelcome attention.

In 1989, however, a stone memorial was placed on public land directly in front of the house. The memorial is titled "Memorial Stone Against War and Fascism," and has the inscription:

Millions of Dead Remind [us]".

The house has been vacant since 2011, and was formerly used by a nonprofit group for disability workshops.