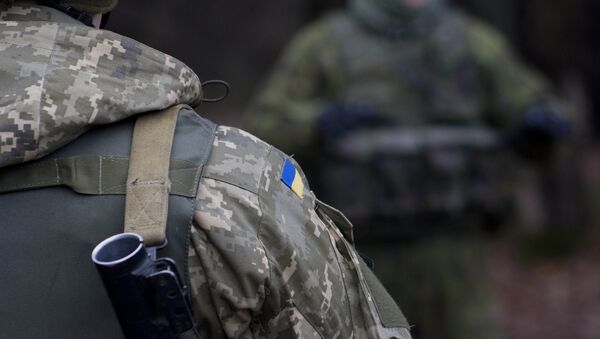 Reconnaissance units from the self-proclaimed Lugansk People's Republic have spotted the arrival of hundreds of foreign mercenaries on the contact line in eastern Ukraine, says LPR People's Militia Chief of Staff Oleg Anaschenko. The fighters are believed to come from countries including the US, Canada, the Baltic states and Poland.

"According to information received from human intelligence sources in settlements near the line of contact, several hundred mercenaries from the United States, Canada, the Baltic countries and Poland have arrived in the area, armed with small arms and equipment," Anaschenko said at a briefing, quoted by Russia's RIA Novosti news agency.

According to LPR Militia, three camps have been created in the Ukrainian-controlled settlements of Bobrovskoye and Bobrovo, near Severodonetsk. There, foreign instructors are said to be training Ukrainian army personnel in reconnaissance, as well as urban combat.

Ukrainian Interior Minister Lectures Hollande on Donbass Crisis
"We have also recorded the presence of training camps in the village of Schastye [on the contact line] where American and Polish instructors teach sharpshooters and sabotage and reconnaissance groups for their further actions on the territory of the LPR," Anaschenko added.

The officer also said that the settlement of Polovinkino in Starobelsk district has seen the arrival of about 150 foreign mercenaries in off-road vehicles, BMPs and BTRs, armed with US-made assault rifles. According to LPR intelligence sources, foreign mercenaries armed with NATO-standard small arms have also been spotted in the village of Trehizbenka in the Slavyanoserbsk district.

"These facts again confirm that the oligarchic Kiev authorities have no intention of conducting peaceful dialogue to resolve the situation in the Donbass, but rather will use any opportunity to destabilize it, thus trying to divert Ukrainians' attention from numerous domestic problems," Anaschenko concluded.

Late last month, observers from the OSCE's Special Monitoring Mission confirmed spotting Georgian mercenaries on the contact line in Lugansk. The mercenaries were reported to be openly wearing 'Georgian Legion' insignia, and speaking Georgian. Three residents of the village of Troitske confirmed that the Georgians had taken up residence in houses in the village.

Kiev initially launched its military operation in the country's southeast in April 2014, after locals refused to recognize new authorities that came to power as the result of a coup in February 2014. In February 2015, a peace agreement sponsored by Russia, Ukraine, France and Germany went into effect. Key points of the agreement include a ceasefire, the withdrawal of heavy weapons from the line of contact, and constitutional reforms in Ukraine which would decentralize authority and grant the Donbass region special status. The ceasefire has generally held, with both sides reporting repeated violations. Progress on implementing the Minsk accords has been lacking, however.