'If NATO Wants Normal Relations With Moscow, It Should Stop Its Buildup First' 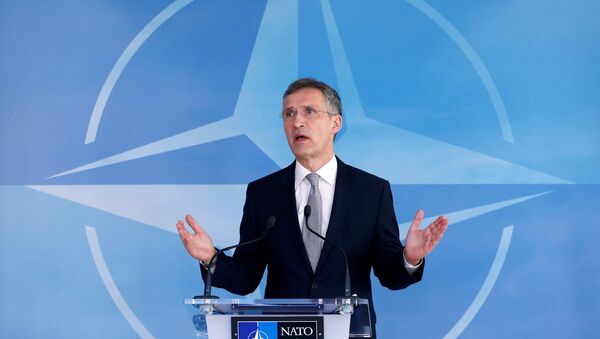 In an interview for Italy's La Stampa on Friday, NATO Secretary General Jens Stoltenberg suggested that the alliance is not opposed to dialogue and cooperation with Russia. Asked to comment, Russian geopolitics experts noted that if the alliance wants cooperation, it should stop the buildup of its military forces on Russia's borders first.

Speaking to the Italian daily, Stoltenberg said that as far as Russia-NATO relations are concerned, "we are not in a Cold War state, but neither do we have the former partnership that we worked on for many years." Still, the official suggested that NATO's formula for relations with Moscow remains "'defense and dialogue' – not 'defense or dialogue.'"

At the same time, Stoltenberg explained that a strong military bloc is necessary not in order to provoke a war, but on the contrary, to prevent it. "As long as NATO firmly and consistently adheres to its chosen line, it will be possible to continue dialogue with Russia, our most important neighbor. We cannot isolate Russia in any way, and should not even try."

NATO Concerned Over Russia's Latest Arms Deployments Near Bloc's Borders
Confusingly, the secretary general said that it's important for NATO members to increase their military budgets, but at the same time to let Russia know that Europeans do not want any clashes.

Commenting on Stoltenberg's remarks, Svobodnaya Pressa columnist Anna Sedova wrote that his logic seems convoluted. "It's unclear how bringing NATO infrastructure closer to Russia's borders, and engaging in a corresponding military buildup is meant to let Moscow know that Europeans 'do not want a confrontation', or to lead to a reduction in tensions."

Stoltenberg, Sedova recalled, has been known to change his position on Russia repeatedly. As recently as June, Stoltenberg accused Russia of breaching the NATO-Russia Founding Act, warned about Russia's 'lack of respect for sovereignty and territorial integrity' and announced NATO plans to deploy four new battalions to Poland and the Baltic states. A few weeks later, he admitted that Russia doesn't pose "any imminent threat against any NATO ally." The official reiterated the latter sentiment in Friday's La Stampa interview.

"What Stoltenberg says should be treated with a grain of salt. He may be a good political leader, but as a speaker he's mediocre. Periodically he talks about issues on which he is not authorized to comment. Most of his statements are thus situational in nature and do not affect NATO's overall strategy."

Lavrov, Kerry Holding Bilateral Meeting on Sidelines of Syria Talks in Lausanne
According to Manoilo, the general secretary's latest comments – about engaging in dialogue with Russia but simultaneously increasing defense spending to 'demonstrate NATO strength', are about "setting the stage for the meeting between Sergei Lavrov and John Kerry in Lausanne, Switzerland. His statement reflects the general trend in relations between Russia and the West."

That trend, the analyst explained, basically consists of efforts to scare Moscow into concessions, followed by a return to dialogue if that doesn't succeed.

"If any progress in relations between the US and Russia is to take place, it will be possible only through the Lavrov-Kerry talks. Right now, the US is trying to reestablish ties that they themselves severed. Apparently, Stoltenberg too has been instructed to support this trend. And so here he is saying that he does not see an enemy in Russia. But if Lavrov and Kerry quarrel in Lausanne, the NATO secretary general too will immediately start to make comments about the necessity to strengthen alliance defenses against the 'scary Russian bear'."

As far as Russia-NATO dialogue is concerned, Manoilo emphasized that there is nothing preventing it; it was NATO that unilaterally cut ties in the first place. "Now they can either restore these channels, or create new ones…Practice shows that even sworn enemies can negotiate. We aren't irreconcilable enemies with NATO. It's clear that they have their interests, and we have our own. The fact that these interests do not always coincide is normal, and something that talks are designed to resolve."

Former MI6 Chief: West Has No Coherent Strategy for Relations With Russia
Moreover, according to the analyst, "the reasons NATO strategists and generals use to explain the impossibility of direct contacts between Russia and the alliance are often simply contrived. The conflict in Ukraine, to which Western countries connect everything imaginable, actually has nothing to do with the alliance. Ukraine is not a NATO country. They artificially tied themselves to these events; let them untie themselves from them."

Ultimately, Manoilo noted that "a de-escalation on Russia's western borders is necessary for dialogue to be established; but we too must understand that NATO's actions in the Baltics, where they are moving three brigades, are ridiculous from a military point of view; if anything happens, these brigades will be blown away like a gust of wind, as will the entire military infrastructure of these countries. NATO understands that this is all nothing more than a [political sideshow]. Nothing prevents them from stopping it, using common sense. This would be seen by Moscow as a positive sign and an invitation for dialogue. After all, there are no real obstacles to dialogue – only good will on the part of NATO is needed."

Sergei Ermakov, a senior analyst at the Russian Institute for Strategic Studies, suggested that a return to the former partnership relations is unlikely, but dialogue on individual issues is possible, and necessary.

"The policy of 'containing' Russia is the alliance's official position – enshrined in documents," the analyst recalled. "This is not just talk, but a long-term strategy, and military planning for conflict against Russia. The buildup of NATO military capabilities for a confrontation with Russia is in full swing; nothing has changed. The hard line against Russia remains, and that's what Stoltenberg is talking about."

"That NATO is not physically prepared – and does not have the military potential for an open conflict with Russia, is another issue. For this reason, we see attempts to contain Russia using more flexibility." This, the analyst suggested, includes efforts such as arms control and non-proliferation cooperation, as well as joint monitoring to keep an eye on Russian military capabilities, and efforts to prevent military incidents at sea and in the air.

Russia Forced to Take Adequate Measures in Response to US Missile Defense Plans
At the moment, Ermakov suggested, NATO "is attempting to shift from escalation to containment. In the last two years they have sought to build up their military potential in Europe, but this hasn't worked out so well. The US provides the lion's share in strengthening the alliance's capabilities. But strengthening defense requires a great deal of time and money, and the Europeans, in particular, do not want to spend – and do not have a lot of money to spare."

Accordingly, "NATO countries want to play for time: to build up their capabilities, but at the same time not to enter into conflict with Russia."

In the long term, the analyst noted, Moscow is looking for a comprehensive approach to improving relations, rather than the fragmented, selective cooperation on issues of interest to NATO that exists today. NATO members actively resist this approach. For this reason, "we should not expect relations to be mended quickly. This is a complex process. But NATO is already prepared for small compromises and some dialogue."