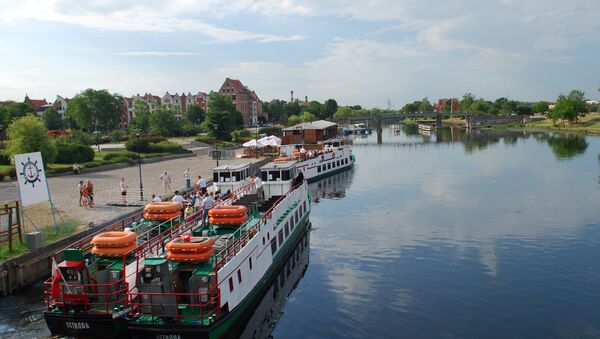 © Wikipedia / Polimerek
Subscribe
On Friday, officials from Poland's ruling Law and Justice Party announced plans to spend 880 million zlotys (about $225 million US) to build a canal that would allow ships heading to and from the coastal city of Elblag, Poland to enter the Baltic Sea from the Vistula Lagoon without passing the Russian port city of Baltiysk.

At the moment, the river port city of Elblag has no direct access to the Sea, blocked by the Vistula Spit, a long, thin peninsula stretching east from the northern coast of Poland into Russia's exclave of Kaliningrad. Ships going through the area must first pass Russian waters.

Now that is set to change. This week the Polish government announced detailed plans to build a 1.3 km long, 80 meter wide, 5 meter deep canal in the western portion of the Vistula Spit by 2020. This would connect the Vistula Lagoon to the Gulf of Gdansk, allowing ships up to 100 meters long and 20 meters wide and with a draft of up to 4 meters to enter Elblag without passing through Russian waters first.

Experts have already warned that the canal's construction costs would be difficult, if not impossible to recover. Nonetheless, Warsaw seems to be digging in its heels to spite Russia. 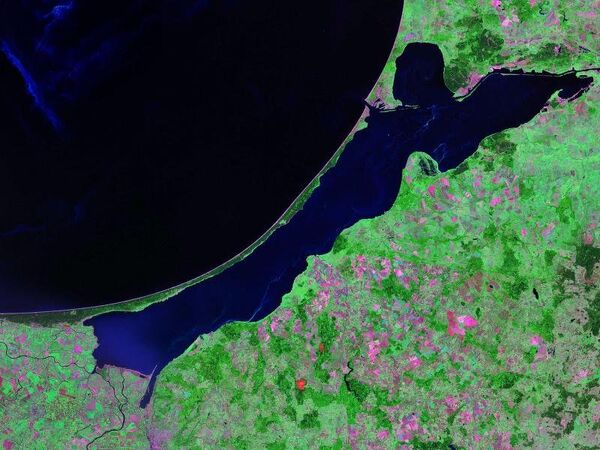 Landsat photo of the Vistula Lagoon. Eastern portion shows exit to the Baltic Sea via Baltiysk, Russia. To the southwest is the river port city of Elblag.
© Wikipedia

A Rotten Policy: Sour Polish Fruit Growers Protest Anti-Russian Sanctions
Speaking to the Russian-language service of RT via his press service on Friday, Jaroslaw Kaczynski, the leader of the ruling Law and Justice Party, explained that the canal would enable Poland to 'end its dependence' on Russia.

"Today, vessels have to go through Russia-controlled waters," Kaczynski's press service noted. "Much depends on the arbitrary decisions of the Russians. We will not only dig a canal, but also a pier, a spa resort and hotels. This is a very profitable place to invest. Unfortunately, due to resistance from Moscow, Poland hasn't been able to connect the port city of Elblag to the Baltic Sea. Having built the canal, we will show that we are a sovereign state."

In a separate press event, Kaczynski said that nothing less than Poland's "political and military-political interests, as well as the preservation of a certain status for Poland," are at stake.

The veteran politician did not go into detail about exactly what 'Russian arbitrary decisions' led Warsaw to its decision, or how exactly Moscow could pressure Poland over what to do with its own territory, but experts suggest that economics and environmental concerns, not Russia, are responsible for putting off any decision on a canal project. Now, it seems, economics had been trumped by politics.

For starters, as mentioned above, the project has been estimated to cost about 880 million zlotys. For comparison, the Russian-Polish agreement on the transit of ships bound to and from Elblag via Baltiysk costs less than $5 million a year (about 19.5 million zloty).

Furthermore, locals fear that Elblag itself will lose out from the canal's construction, since the city has traditionally been oriented toward exports and imports with Russia. The city has already faced millions of euros in losses amid the sanctions war between Russia and Western countries.

Baltic States' Agriculture, Fisheries Face Collapse After Loss of Russian Market
Today, the port city makes ends meet by importing Russian coal, fertilizer and animal feed to Europe. If the canal were built, locals would be forced to find new trading partners, something Poland's Baltic neighbors have already shown is easier said than done. This is especially true given the fact that the nearby ports at Gdansk and Gdynia are already more than enough for Poland's northern Baltic shipping needs.

Speaking to RT, Vladimir Olenchenko, a senior fellow at the Moscow-based Institute of World Economy & International Relations, suggested that it's absolutely obvious that the project will have no economic benefit.

The Polish government, the analyst noted, "has shown a strong desire to 'poke' Russia – to show that they don't like us. As for the money" (to build the canal), "they will definitely look for it from foreign sponsors. This will be pointless spending that won't change the situation. Aside from Russia, there are the Baltic countries, which, under the guidance of the EU, are building a railroad along the Baltic coast from Helsinki to Berlin via Warsaw. There are roads and other ports."

In other words, "the EU does not need the Elblag port, and especially not to spend money on it. Investment into the canal will not pay itself off." 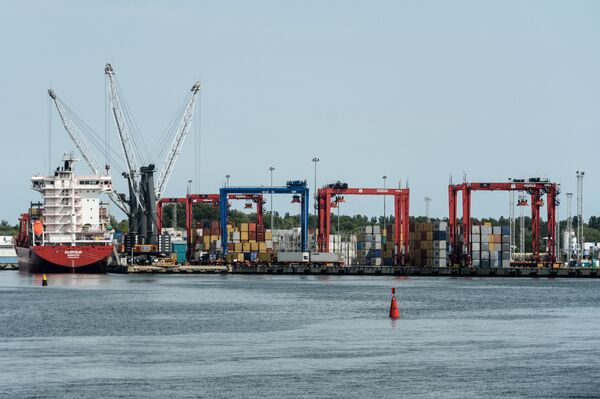 For his part, Andrei Peshkov, the director of the Russian Research Institute for Nature Conservation, warned that the canal's construction would also have a drastic negative environmental impact. The Vistula Spit, he stressed, is a unique natural environment, famous for its pristine nature and rare flora and fauna. In the event of the canal's construction, local migratory birds and fish would be the first to be affected, with the canal changing the local ecological balance.

"If the spit is dug into, the local ecosystem will be disrupted," the ecologist noted. "This will bring enormous damage to the natural environment; therefore, the project directly violates the Helsinki Convention on the Protection of the Baltic Sea…The area's hydrological regimen will change, and the ultimate consequences of that are difficult to predict, and could be even more serious. It is necessary to hold an international investigation to assess the damage. Let [Warsaw] carry this out first, and dig second, because in the event that something goes wrong, sheer enthusiasm to restore the ecosystem will not be enough."

US General Reveals Details on NATO Troops Deployment in Poland
Polish political scientist Alexander Butshakovski emphasized that it was obvious that the canal was a political project – not one based in economic realities. "It's no surprise that this escapade is taking place during the presidency of Andrzej Duda," the expert suggested.

"In domestic policy, he and his policy have not shown any successes, and so a desire arose to draw the Polish public's attention to the external enemy – Russia. This is happening now as a new round of anti-Russian politics – a kind of revenge for the fact that Russia abandoned its use of Baltic ports."

Earlier this week, Marek Grobarczyk, the minister of maritime economy and inland navigation, brushed off environmental concerns, suggesting that construction would take place "in compliance with EU law." Nevertheless, he too admitted that the "geopolitical aspect" to the project was "extremely important" for Warsaw. "It is impermissible for an eastern border of the EU and a NATO border to be 100% under Russian control, for security to be threatened that way," the minister noted.

In other words, Warsaw seems prepared to spend a quarter billion dollars for the sake of a pointless political spat with Russia. Moscow probably couldn't care less, were it not for the fact that the environmental damage caused by the project would affect Kaliningrad Region as much as it does Poland.