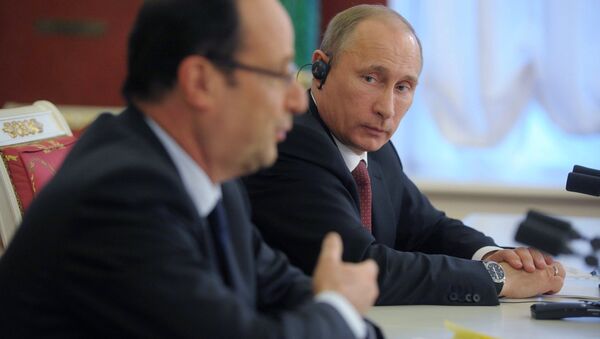 © Sputnik / Alexei Druzhinin
/
Go to the photo bank
Subscribe
Last week, Russian President Vladimir Putin cancelled his planned trip to Paris after President Francois Hollande questioned the usefulness of a meeting with the Russian leader, citing the situation in Aleppo. However, according to Expert magazine contributor Igor Gashkov, Russia's the one with the grievance – and the reason is simple.

Hollande's demarche consisted of refusing to attend the opening of a church and Russian cultural center in the French capital, which President Putin was set to attend. According to Igor Gashkov, Elysee Palace effectively intended to turn the visit into a demonstration – a sign "that Paris does not feel solidarity with Moscow on any issue," not even culture.

Putin responded coolly but firmly, cancelling the visit, citing a 'scheduling conflict', but also emphasizing that he remained open to meeting with Hollande in the future at the latter's convenience.

In recent weeks, France unexpectedly stepped up to become a central critic of Moscow over Syria, citing the renewal of hostilities between the Syrian military and Western-sponsored militants, following the collapse of the Russian-US sponsored ceasefire of September 9.

At UN, Russia Blocks Illegal Aleppo 'No-Fly Zone', West Abets Nusra Terrorists
Last weekend, Russia vetoed a French-drafted UN Security Council resolution calling for a ceasefire in the militant-held portion of the city of Aleppo, suggesting the ceasefire would do little except to allow Nusra Front terrorists to reorganize and regroup. Meanwhile, France, the US and others responded by vetoing a Russian plan that would have Nusra retreat from Aleppo altogether, allowing a ceasefire in the city to be resumed.

Commenting on the present tension in relations, Gashkov recalled that less than a year ago, "when Vladimir Putin hosted President Hollande in Moscow" following the Paris terror attacks, the relationship was very different.

"After the Islamists' attacked Paris on November 13, 2015, the Fifth Republic wanted revenge. Hollande invoked the EU Treaty to seek assistance from other EU members in the fight against Daesh (ISIS/ISIL), but received it only from Berlin, and even then only in extremely truncated form. It was then that the idea of a Russian-French rapprochement was born: both sides were already fighting in Syria, and could combine their efforts."

Unfortunately, Gashkov noted, a year has passed, and "it has become clear that nothing came out of the plans for military cooperation. Paris was forced to choose between Moscow and Washington, and it chose the latter."

"In spite of the fact that plans for military cooperation were not to be, Moscow continued to hope that the 2015 attacks would lead to changes in the points of reference guiding Paris's foreign policy. In the first days after the attacks, this seemed inevitable. The French president announced at the time that his country has 'only one enemy, and it is Daesh.'"

Eleven months on, the situation has changed dramatically. Now, Gashkov recalled, Foreign Minister Jean-Marc Ayrault makes unfortunate statements to the effect that "if one has to choose between the Islamic State and Bashar Assad, it's best not to choose at all."

'I Have the Impression That France Copies and Pastes US Foreign Policy'
In time, the journalist noted, Moscow was forced to recognize that "many of the statements made by French authorities in late 2015 were dictated by the shock caused by the terror attacks." And this also relates to issues other than French-Russian relations, he added.

"A few hours after the attacks, Hollande promised constitutional reform that would deprive terrorists with dual citizenship of their French citizenship; a few months later, this idea was dismissed as being humiliating to French Muslims. So too did the president refuse to consolidate the provisions of the state of emergency in the constitution."

Effectively, the Russian-French anti-Daesh alliance "proved to be just one of a series of initiatives which were buried after Paris, awaking from their initial shock, decided not to follow through."

Unfortunately, Gashkov noted, "the unfulfilled hopes for a rapprochement between Russia and France left a particularly bitter aftertaste," considering Paris's refusal to go along with the NATO military exercises in Poland and the Baltic states, where the threat of Russian aggression was being pumped up all through the spring and summer.

But a real improvement in relations was not to be, given Paris's hidden strategic interests in the Middle East.

"The close friendship between France and the oil giants of Saudi Arabia and Qatar has existed for decades, and given rise to gossip for just as long. 2016 has been rich with such incidents, where against the background of a diplomatic reprimand against Vladimir Putin, Paris presented the Order of the Legion of Honor to Saudi Crown Prince Muhammad bin Nayef."

"In 2015, French investigative journalist Jean-Loup Izambert published a book showing that Franco-Saudi and Franco-Qatari ties determined Paris's course in the Syrian war. According to the author, Paris began to provide military support to Islamist groups opposed to the Syrian government in late 2011, six months after the beginning of the conflict, and has continued to do so over the past five years. The same groups receiving French support also get it from Doha and Riyadh."

Two French Commandos Injured in Daesh-Linked Drone Attack in Iraqi Kurdistan
Moreover, Gashkov recalled that in 2013 it was revealed that France began supplying Syrian jihadists with weapons in late 2012, before the EU officially lifted the ban on such deals. "At the end of 2012, French Foreign Minister Laurent Fabius [even] stepped out in support of the Nusra Front jihadists, which at the time concealed their status as the Syrian branch of al-Qaeda.  According to Fabius, Nusra was "doing a good job on the ground," and did not deserve being labeled as terrorists. In 2013, Paris officially recognized Moaz al-Khatib, one of the organizers of mass actions in support of Nusra, as an authorized representative of the Syrian opposition, even after the group became listed a terrorist group by the State Department."

"In 2016, Nusra, which changed its name to Jebhat Fatah al-Sham and announced that they had severed ties with al-Qaeda, became one of the key armed groups in eastern Aleppo getting bombed by Russian aircraft. On the eve of Vladimir Putin's cancelled visit to Paris, France submitted a resolution to the Security Council providing for the establishment of no-fly zones in this part of the city, and demanded that Russia stop its airstrikes against the positions of the Islamists." Accordingly, Gashkov noted, it's difficult to deny that the Russian charge that Western and Gulf State nations provide support for terrorists in Syria doesn't stick double in Paris's case.

Ultimately, the journalist suggested, "the diplomatic crisis between Moscow and Paris, exacerbated in recent months, was made possible because the initial shock caused by the Islamists, which forced France to reconsider its priorities in the Middle East, had passed. After some hesitation in November 2015, the alliance between Hollande and the Saudis again looks to be indestructible, and Paris is again looking at events in the Arab world through the eyes of Wahhabi sheikhs."