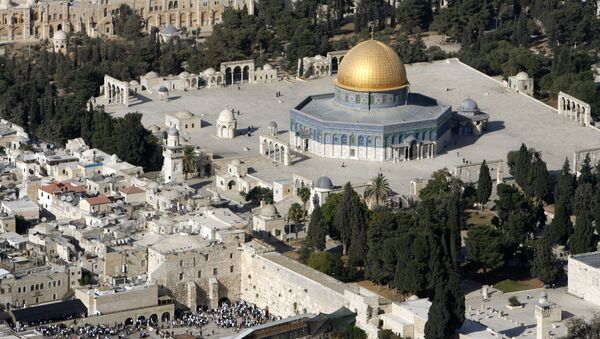 Israel Halts Cooperation With UNESCO Over Resolution on Jerusalem - Minister
MOSCOW (Sputnik) — On Thursday, UNESCO's Executive Committee voted for the resolution, in which it affirmed the importance of the Old City of Jerusalem to Islam, Christianity and Judaism, but called the Temple Mount a Muslim holy site.

"UNESCO has dismissed thousands of years of Jewish history in 24 votes. Those who voted for the motion are politically motivated and have lost all credibility in the eyes of the millions of Jews who come yearly to pray at the western wall and the millions who pray daily that G-d should return to his dwellings in Zion," Goldschmidt said, as quoted by Israel's Ynetnews daily.

According to the Rabbi, the fate of the the holiest site for Jews is determined not by the 24 diplomats who voted in favor of the resolution, but by millions of Jews, who make pilgrimages to the Jerusalem Temple annually.

Earlier in the day, Chief Rabbi of Russia Berel Lazar said that the resolution which refers to "special ties of Islam to Jerusalem without mentioning Jews' rights to the holy sites of this town" was an offense to all Jews and discredited the UN organization.

He also added he was perplexed by the vote of the Russian delegation to UNESCO in favor of the resolution. Lazar's stance has been supported by a number of representatives of the Muslim community in Russia.

000000
Popular comments
Zionist have been denying Palestinian rights and existence as equal human beings for years. Now that the shoe is on the other foot they don't like it.
swenguzzi
14 October 2016, 19:02 GMT
000000
Yet again, by excluding two of the three demographics in question, the UN proves it is a clown gang. If what is said here is a correct interpretation of the UN text, well: some Palestinians are Christian, so they managed to be both antisemitic AND anti-Palestinian at the same time... Wow.