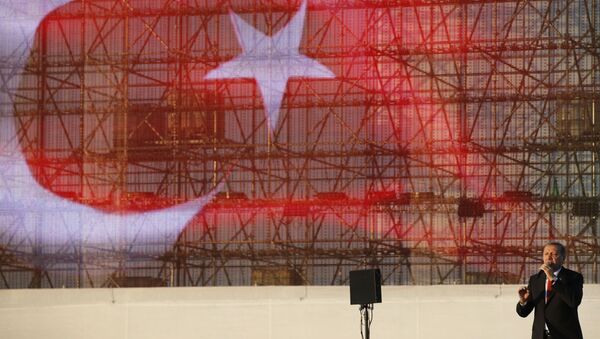 ANKARA (Sputnik) — A proposal to replace Turkey's parliamentary democracy with a presidential system is expected among a set of constitutional reforms the ruling party is planning, Turkish Prime Minister and Justice and Development Party (AKP) chair Binali Yildirim said Wednesday.

"After the constitutional referendum decision passes through parliament, it will be presented to the public. This used to take 90 days, now it is 60 days, but we are unlikely to make it before 2017. The referendum could be held before spring 2017," Bozdag said in an interview with Turkey's Kanal 24 broadcaster.

He stressed the need for all 317 AKP lawmakers and the 40 Nationalist Movement Party (MHP) lawmakers in the 550-member parliament to vote in favor of holding the referendum. Yildirim said this week the constitutional reform bill could either be adopted by a constitutional majority of 367 votes or a referendum may be held if it gains 330 votes.

With a Little Help From His Friends: Erdogan to Seize Dictatorial Control
The main opposition center-left Republican People's Party (CHP) and the pro-Kurdish Peoples' Democratic Party (HDP) oppose a presidential system in Turkey.

Despite vocal foreign and domestic concerns, Turkish President Recep Tayyip Erdogan is poised to hold a referendum to abolish the 1923 constitution and its parliamentary system to complete his executive sweep.