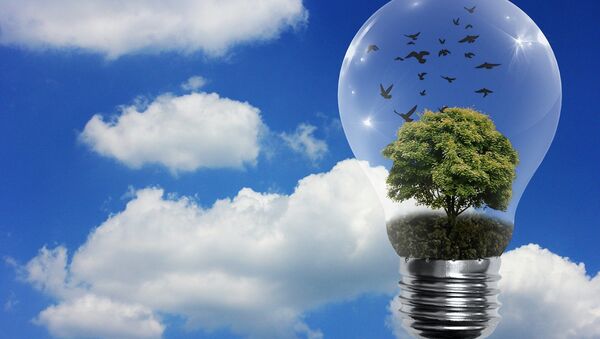 © Photo : Pixabay
Subscribe
International
India
Africa
A number of countries around the world are showcasing innovative ways in which renewable energy can be sourced and consumed, but going completely 'green' still seems like a long distant possibility. The rising usage and investment in Solar Power is however showing signs that it could be a viable alternative to fossil fuels.

George Airport in South Africa has just become the first in the continent to run entirely on solar-generated energy.

The South African airport, located in the south of the country, is powered by 2,000 solar panels and produces up to 750 kW every day. The world's very first solar powered airport was Cochin International Airport in Kerala, India which has since also encouraged a number of similar initiatives to have been developed across the country.

A number of environmental groups in Canada, US and countries across Europe have also been endorsing the viable use of renewable energy sources with much investment injected in the field.

Lyman suggests that even by as far as the year 2050, the financial costs of building a 100 percent renewable energy world are just far too enormous and the land area needed to accommodate such sources of energy supply is just as daunting a challenge.

Sputnik spoke to an industry expert who works in the Gas and Oil industry in the UK who wished to remain anonymous.

"The energy sector is a billion dollar global industry, and so the threat of renewable energy completely replacing the likes of say gas and oil would certainly be opposed in some way," he said.

"But saying that, it is very much the responsibility of national governments to create the policy and investment framework for energy transitions to smoothly take place. Companies of course all have a responsibility, but I wouldn't expect the major players to take on voluntary initiatives that may affect their business models negatively. It will need to be coerced more broadly," he added.

According to stats published by UK based climate science website Carbon Brief, solar usage across England has already started to beat coal in 2016. This, they claim, reflects the changing face of UK electricity supplies in particular and shows that solar capacity has nearly doubled since 2015.

UK solar beats coal over half a year https://t.co/qtDYhvBIDK via @carbonbrief pic.twitter.com/N16CC5lwQx

These results are said to be driven by changes in wholesale energy markets and the rising costs in carbon energy for even domestic consumers. With commercial industries also looking at becoming more efficient both economically and attempting to show that their brands are also 'greener' — this is also encouraging the rise in solar usage

There is also a prominent drive by many more commercial solar panel companies pitching installation for domestic homes and businesses in order for their customers to save the costs of electricity and gas energy supply, whilst also doing their personal bit for the environment.

Such a great use of the land around #airports! #solarenergy #renewables https://t.co/dwfm4ADqlj

But the strongest future trend, according to experts, is developing new and even better ways to extract energy from coal and gas without sending its dangerous byproducts into the environment.

And many are even considering nuclear energy as being a viable, cleaner solution, although this presents a number of understandable fears of this technology source.

Renewable energy for now continues to be a much more available and popular alternative choice for all those who will always be keen on making their pockets, as well as their environments that much more efficient.