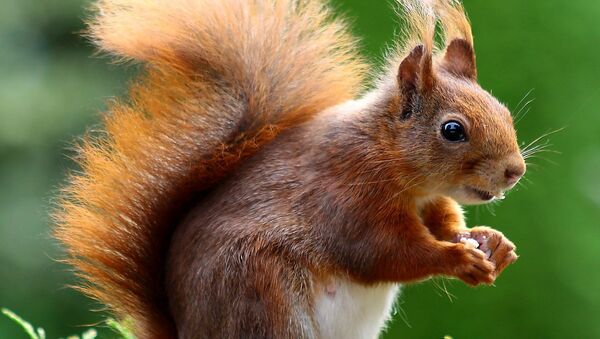 Conservationists have turned to utilizing military know-how to ensure a new wild colony of red squirrels is protected from gray squirrels in Wales. Biologist and Director of Red Squirrels Trust Wales, Dr. Craig Shuttleworth told Sputnik how his team is employing "tactical military strategies" to defend the red squirrel's territory.

The red squirrel is native to the UK, but is a rare sight in most British gardens and countryside parks. Since the introduction of the American gray squirrels in Victorian times, the invading grays have vastly outnumbered their red compatriots.

Fighting over territory and food, the red's numbers were also severely hit by the Squirrel Pox Virus, a disease grays carry but have developed an immunity to — which, however, is usually fatal to red squirrels. The mortality rate for untreated infected red squirrels in the wild appears to be 100 percent, with most dying within 15 days of being infected.

However, they have a champion in the form of Dr. Craig Shuttleworth, one of the UK's leading red squirrel experts, who has been working for 20 years to help save them from becoming extinct.

He told Sputnik about a new project in the Ogwen Valley, five miles from Bangor in western Wales. He and his team are utilizing military-style tactical land analysis to help the intrepid British reds stage a comeback.

"Mapping is what conservation is about. It's about looking at resources and landscapes. Military tactics look at geographical pinch points."

"With grey squirrels, we understand how they move through landscapes, we understand that in areas where there are few trees, like mountainous areas here in Snowdonia [in the north west of Wales], you're not going to get many or any grey squirrels. They're not going to be able to move around to cross valleys. And knowing that is helpful in keeping red squirrels apart from red squirrels."

These pinch points or areas that are narrowed, for example, by topographical features like mountains, are easier for red squirrels and their conservationists backup to defend.

Dr. Shuttleworth's new project follows the success of the red squirrel population in Anglesey, an island off the north-west coast of Wales, which he also managed. From 1998, the population of red squirrels has increased from 40 to more than 700.

The earlier tests on the island have been so successful, units of vanguard red squirrels have been crossing bridges to the mainland to set up further camps.

"Anglesey is a peninsula so there is the advantage that it's a landlocked area. We know that other squirrels [not part of the colony] can only come from one direction: from the mainland. However, what was quite was quite unexpected, was that our red squirrels crossed over to the mainland.

And we know that by about 2009 — we started to catch them around 2009 — they had started to develop a colony at Gwynedd, in the area around Bangor [on the mainland's west coast].

"Anglesey isn't really an island, not from a squirrel's perspective because it's connected by bridges to the mainland: they're a highway for squirrels to get across. And we know that they can swim: we have pictures of them swimming."

As their numbers have grown, so the little critters have grown bolder, as this video evidence from the Red Squirrels Trust Wales, filmed in Glyn Garth, also on the Welsh west coast, proves.

Although the limited access to Anglesey has helped the red squirrels thrive, away from the influence of the pernicious grays, there has been the unfortunate issue of inbreeding.

"The crossing of the squirrels from Anglesey to the mainland probably continues to this day. It's limited, it's not easy for them to get across, so they've taken a bit of a gamble. So, we have a bottleneck, which means that potentially we do have inbreeding in the population that is establishing on the mainland."

Dr. Shuttleworth's strategy is to transport red squirrels raised in other parts of the UK into Wales to provide genetic backup.

"We want to bring in the extra genetic diversity. It's called a conservation reinforcement," Dr. Shuttleworth told Sputnik.

Ten squirrels bred by the East Anglian Red Squirrel Group in Norfolk are among those who will soon be arriving in Wales, transported in special miniature squirrel boxes.

This fortification scheme has also been successful in the past. The Red Squirrels Trust Wales filmed this pair, introduced to Anglesey in 2008.

With their battle plans in place, the conservationists hope they will be able to save the British red squirrel from the real threat of them disappearing within a generation.

Autumn is a great time of year to spot red squirrels.

So, if you've never been lucky enough to see one before, check out the National Trust website, to find out where your nearest reds live.