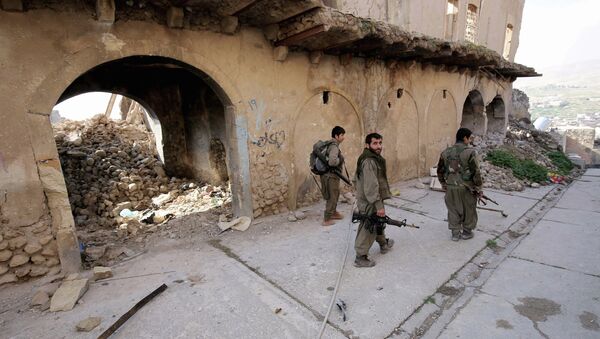 In an interview with Sputnik Muhammed Xelil, mayor of the Iraqi city of Sinjar, said that the city, liberated from Daesh by Kurdish Peshmerga fighters in Novermber 2015, will become an open-air museum, and its residents will live in a new city of the same name.

He  said that the authorities had decidied to turn the city into a museum so that people know what the jihadists had done to it.

US-Led Coalition Destroys Daesh Security HQs Near Iraq’s Sinjar
“Sinjar was under Daesh control for almost a year. During the operation to liberate it  some of its parts, especially in the center were severely damaged and became uninhabitable. During their retreat the terrorists set off booby trap mines and bombs they had planted all across the city. So the people of Sinjar said they wanted to build a new city,” Muhammed Xelil said.

He added that Iraqi Kurdistan leader Masoud Barzani supported the idea and so they got down to work.

“We are going to have an open-air museum here to remind people of the crimes  committed here by Daesh terrorists. We’ll build a new Sinjar nearby.”

Xelil said that once the construction was over people would start getting back, adding that some of the surrounding villages still remained under Daesh control, but woud soon be liberated too.

Sinjar is a city in Iraq’s Mosul Province. In keeping with Article 140 of the Iraqi Constitution, Sinjar has the status of a disputed territory.

Kurdish representatives insist that after the liberation of Mosul Sinjar be declared a province and remain under Kurdish control.