The Evolving Hybrid War on Ethiopia is All About China 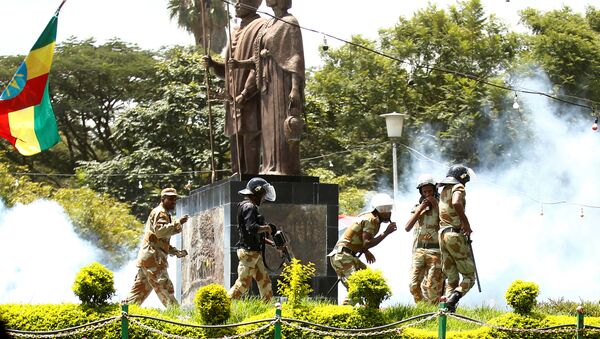 Andrew Korybko
All materials
The regime change riots and torching of foreign companies which preceded Ethiopia’s imposition of a six-month-long state of emergency have more to do with waging a Hybrid War against China’s Maritime Silk Road and its Horn of Africa component than they do with airing out local socio-political grievances.

Crisis Background and the Origins of Hybrid War

Africa
Ethiopia to Keep State of Emergency Over Protests for Sake of Public Order
Africa’s second-most populous country and one of the world’s fastest growing economies has been in sporadic turmoil over the past 10 months as its largest plurality violently agitated over what it claimed to be socio-political injustices. The Oromo began protesting late last year because of opposition to the central government’s plan to expand the capital of Addis Ababa into their region. The problem arose because the municipality is entirely surrounded by Oromia Region, so it’s impossible for Ethiopia’s most important city to develop in the future without reaching some sort of compromise with the neighboring locals about their land rights.

The immediacy with which some of the Oromo, which are Ethiopia’s largest plurality at an estimated one-third of the population, took to violence indicates that there’s a deeper undercurrent of long-running discontent present in the community. This can be traced back to the simmering resentment that the most extreme members of some of the country’s identity groups have to Ethiopia’s post-civil war internal reorganization and subsequent federalization, which some of their representatives believe can only be remedied through regime change, secessionism, and/or another civil war.

Interestingly, while rightly being designated by the Ethiopian government as terrorist groups for the carnage that they intend to create in the country, some members of such organizations like the Oromo Liberation Front and Ginbot 7 are hosted in the US and neighboring Eritrea.

The complicated nexus of domestic-international terrorism and deeply rooted socio-political grievances explains why the Oromo extremists weren’t satisfied when the government halted its Addis Ababa enlargement plans and thus transformed their “land rights” “protest” movement into an outright regime change one, taking clear advantage of what they perceived to be government weakness in earlier “caving in” to their demands. Although the security forces did an effective job keeping a handle on the occasional riots that broke out over the past year, they ultimately weren’t able to fully control the situation and thus needed to bring in the military to assist.

In the words of government spokesman Getachew Reda, “You have motorbike gangs now carrying petrol bombs, carrying firearms in groups of 10 going from place to place, terrorizing the public… The kind of threats we are facing, targeting infrastructure, targeting civilians, cannot be handled through ordinary law enforcement procedures.”

It should be obvious to all observers that what’s happening in Ethiopia right now isn’t that “the people” are “protesting”, but that terrorist groups are waging Hybrid War on the country, and just like all recent instances of this stratagem, geopolitical considerations are the driving force behind these violent events. Instead of being directed against Iran like the War on Syria initially was, or against Russia like the War on Ukraine was, the Hybrid War on Ethiopia is predicated against China.

In investigating the true geopolitical motivation behind the out-of-control unrest in Ethiopia, it’s important to cite the rest of Mr. Reda’s statement to the press. Al Jazeera quotes him as also pinning the blame for the violence squarely on the shoulders of rivaling states Eritrea and Egypt, both of which have their own separate problems with Ethiopia, though he was quick to issue the caveat that it might be actors within those countries which don’t enjoy formal government support that are the ones responsible.

About Eritrea: it used to be a province of Ethiopia and waged a bloody three-decade-long secessionist insurgency against it which ultimately culminated in the territory’s 1993 independence. Both countries fought a mutually stalemated disastrous war from 1998-2000 over the frontier village of Badme, and the unresolved frozen conflict continues to fuel heated animosity between both sides. Ethiopia has since accused Eritrea of harboring every sort of anti-Addis Ababa group imaginable, so it’s no surprise that it’s pinning the blame against Asmara once again.

Egypt, however, is in a bit of a different position relative to Ethiopia. Both ancient civilizations have enjoyed fruitful relations with one another across several millennia, so there’s no such mutual discord between them on the same level as there is Ethiopia and Eritrea. The problem, though, is that Ethiopia is pushing forward with the Grand Ethiopian Renaissance Dam project as part of its industrialization and modernization drive, and this project will give Addis Ababa control over the rest of the Nile’s downstream waterways once it’s finally completed.

A classic security dilemma is at play here, since Ethiopia is not undertaking this project for any aggressive or power-hungry reasons, but for the progressive development of its population which is quite literally hungry for electrical power. Egypt interprets this differently and is afraid that it will forever be placed in a subservient geostrategic position vis-à-vis Ethiopia if Addis Ababa successfully builds the dam, which is why it’s publicly raised concerns about this on numerous occasions and is even reported to have asked its Israeli ally to diplomatically intervene in solving this spat.

A cursory assessment of the strategic situation wouldn’t indicate that Egypt or Eritrea are in cahoots with one another apart from their separate disagreements with Ethiopia and having both been blamed for the riotous terrorism that’s swept over Oromia Region, but there’s actually something deeper which connects these two states and its their direct support for the Saudi-led GCC War on Yemen.

Egypt’s involvement is publicly acknowledged by Cairo, while Eritrea’s has been hidden by Asmara despite the UNSC Monitoring Group on Somalia and Eritrea officially reporting in October 2015 that “Eritrea forged a new strategic military relationship with Saudi Arabia and the United Arab Emirates that involved allowing the Arab coalition to use Eritrean land, airspace and territorial waters in its anti-Houthi military campaign in Yemen”, for which it “received compensation from the two countries, including monetary compensation and fuel supplies”. Moreover, “the Group has received credible information that Eritrean soldiers are embedded with the United Arab Emirates contingent of the forces fighting on Yemeni soil.”

It’s common knowledge that the GCC is the US’ “Lead From Behind” proxy for controlling the Greater Mideast Region, so given the heavy connection that the two countries which have officially been accused of destabilizing Ethiopia share with one another through the bloc’s War on Yemen, it’s both logical and plausible to question whether or not the US is also involved, and if so, what it stands to gain from this horrible violence in the Horn of Africa.

New Center of Power: 'China Insisting on Global Governance Reforms'
The US’ chief geostrategic imperative in the 21st century is to stop China’s One Belt One Road (OBOR) vision of global infrastructure connectivity via the New Silk Roads. Having failed in its Wolfowitz-Brzezinski unipolar task of preempting the rise of Russia, China, and Iran and the multipolar strategic convergence between them, the US is now racing to preserve its fading global hegemony by orchestrating a series of Hybrid Wars all across Afro-Eurasia in order to force a chaotic wedge between them and possibly even entrap these countries in destructive quagmires. Furthermore, the countries which have been targeted for Hybrid War are also geostrategic transit states for pivotal multipolar transnational connective infrastructure projects, be it the Eurasian Land Bridge that was envisioned to run through Ukraine or the Friendship Pipeline that was supposed to go from Iran to Iraq and Syria. The reason why grand projects such as these are being targeted is because they are the key catalysts in peacefully constructing the emerging Multipolar World Order.

Ethiopia is surprisingly just as significant as both of these aforementioned Hybrid War battlegrounds are because of the importance that China attaches to it as its closest partner in Africa and the forecasted role that it will play along the Maritime Silk Road half of OBOR. Ethiopia’s nearly 100 million people function as a large consumer market for China’s overcapacity production and a promising labor force for its outbound investment. Additionally, President Xi Jinping previously declared that there are similarities between the African and Chinese Dreams, meaning that China identifies itself with Africa and accordingly wants to help the continent rise up just like the People’s Republic began doing decades ago, and OBOR is the vehicle for achieving this mutually beneficial objective.

The obvious stumbling block, however, is that Ethiopia has been landlocked ever since Eritrea’s secession, which is why China invested approximately $3.4 billion to build a state-of-the-art railroad from the Red Sea port of Djibouti to the hinterland capital of Addis Ababa.

This New Silk Road is of prime importance because it finally allows the Chinese-Ethiopian Strategic Partnership to flourish to its fullest multipolar potential, moving past the political realm and into the tangible one of real-sector commercial engagement. Ethiopia’s advantageous location also makes it a convenient midway node in linking the EU and China through OBOR, which also reinforces the strategic significance of the Red Sea and hints at the ulterior motives that the US and GCC have for waging their War on Yemen around the Bab el Mandeb chokepoint.

China is aware of all of this and foresaw it in advance, which is why its first-ever overseas military base will be in Djibouti. This isn’t just to oversee the Red Sea maritime trade routes on which most of its current bilateral trade with the EU depends, but to also protect its crucial game-changing continental investment in the Djibouti-Addis Ababa railway.

Curiously, the spike in terrorist activity and the riotous destruction of foreign businesses which preceded the Ethiopian state of emergency uncannily coincides with the recent opening of this route, so it can’t be ruled out that the same Great Power which had an interest in undermining the Eurasian Land Bridge in Ukraine and the Friendship Pipeline in Syria also has a related strategic stake in sabotaging the Ethiopian Silk Road in the Horn of Africa through yet another of its many Hybrid War schemes.