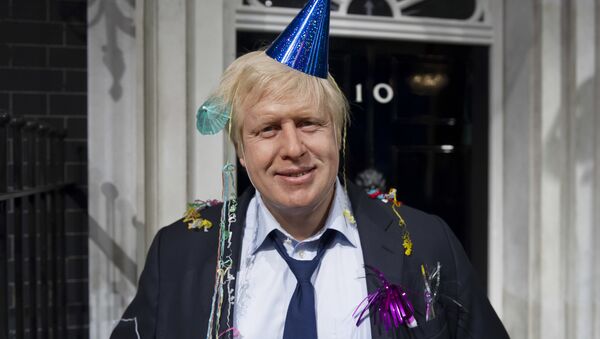 Finian Cunningham
All materials
The bizarre US trend of encountering crazy clowns has come to Britain, reports say. The latest sighting perhaps was Britain’s foreign secretary Boris Johnson standing up in parliament and appearing to threaten Russia with war.

Johnson, whose buffoonish public antics have garnered a reputation for being something of a clown, was speaking this week in the British House of Commons on Syria’s conflict. He directed much of his fire-breathing act at Russia, reiterating allegations of war crimes during the offensive to retake the northern city of Aleppo.

Then Johnson added a curious phrase. He warned that if Putin continued the military campaign in Syria, this would result in the leader’s ambitions for Russia being “turned to ashes”.

Maybe bumbling Boris was referring metaphorically to demise of Russia’s international reputation when he said “turned to ashes”. There again, given Russia’s grim history of war devastation, those particular words have sinister connotation.

Just like the internet craze gripping America where members of the public are being spooked by mystery clowns jumping out at them while walking down streets, or lurking in bushes outside their homes at night, the issue of intent is ambiguous. Is it a prank, or is it a veiled threat? A face-painted circus clown with crazy hair-do is usually slapstick fun. But a clown brandishing a hammer or chainsaw, as in the latest internet trend, now that’s creepy. And part of the ambiguity, one suspects, is intended to be menacing.

The same goes for Britain’s clownish foreign minister. His insinuation of Russia “turning to ashes” comes not out of the blue, which could be dismissed as ridiculous, but rather in the context of a steady drum roll of provocative accusations and threats against Russia made by the US, France and Britain.

Russia
Second Chance: Russia, US to Give Syria Peace Another Try
Ever since the Kerry-Lavrov ceasefire in Syria failed last month – due to Western-backed militants breaching the truce, capped by a US air-strike massacre at a Syrian army base in Deir ez-Zor on September 17 – Russia and its Syrian ally have stepped up the offensive to fully capture the key city of Aleppo.

For more than three weeks now, the American, British and French governments have embarked on an unprecedented media campaign to discredit Russia’s military operations, with tendentious allegations of war crimes. These same Western states have also toyed with proposals to increase weapons supplies to the militants, including anti-aircraft missiles. A US State Department official publicly conjectured that Russia could see more of its servicemen being returned in “body bags” and he also hinted that Russian cities could be targeted in terrorist bombings.

Washington 'Dealing Deadly Blows to Hopes of Peace in Syria'
Recall, too, that former CIA chief Michael Morell recently endorsed the killing of Russian personnel in Syria by terrorist proxies as a way of making Russia “pay a price” for its military intervention in Syria, which appears to be defeating the US-backed covert war for regime change in that country.

The information that the Western powers base their claims on is supplied by unverifiable sources from within the besieged eastern part of Aleppo. The Western governments and media routinely rely on “amateur” (sic) video footage – including drone (sic) video footage – from the so-called Aleppo Media Center. The AMC is under the control of the Al-Nusra terrorist group.

Yet based on this dubious source of information, Washington, London and Paris are calling for Russian leaders to be prosecuted for war crimes at the International Criminal Court in The Hague.

President Putin this week rebuked Western claims of Russian war crimes as empty “political rhetoric”. And that’s true. But what’s disturbing is the repetition of these baseless claims by Western governments and dutiful news media.

Christopher Black, the internationally respected war crimes defense lawyer, told this author that history shows that when Western powers want to launch a war or some other military intervention against a designated enemy, the deed is often preceded by a media campaign of vilification. “In this way, the Western public is being conditioned into acceptance by their rulers of a desired, eventual military action,” said Black.

Western governments, whose derogatory charges against Moscow are being amplified without question by the Western mass media, have also advocated increasing economic and political sanctions against Russia. European parliamentarians voted this week for a resolution that could pave the way for Russian news media channels like RT and Sputnik being banned from Europe’s airwaves or internet.

World
Kremlin on Possible Syria Intervention by UK: Fight Against Terrorism or Assad?
Taken in this context of relentless Western hostility towards Russia, Boris Johnson’s words about “turning to ashes” should not be easily dismissed as merely clumsy, ill-chosen blather from a political court jester.

Johnson may have verbally ruled out the setting up of a no-fly zone around Aleppo, but his hawkish Conservative party colleague Andrew Mitchell said the opposite.

Mitchell, a former Cabinet minister and well-connected to the British establishment, is backing American and French calls for a no-fly zone. That was the basis of the French draft resolution at the UN Security Council last weekend, which Russia vetoed because it said such a demarcation would have given air cover to the terrorist-dominated militants in east Aleppo.

Andrew Mitchell later went on CNN to reiterate claims that Russia was behaving in Aleppo like Nazi Germany did in Guernica when it supported the fascist Spanish dictator Franco to defeat besieged socialist revolutionaries during Spain’s civil war in the 1930s.

Talk about a grotesque, illiterate re-writing of history and abuse of false historical analogies to serve a present-day agenda. It is obvious that the British establishment, as articulated by Mitchell, is recklessly pushing an agenda to demonize and criminalize Russia in order to justify military intervention in Syria – one that would likely lead to all-out war between NATO and Russia.

US-Pushed 'No-Fly' Zone in Syria 'Nothing But Air Cover to Terrorists'
Asked if a no-fly zone inflamed the risk of war, Mitchell deprecated any such concern by comparing it to “appeasement” of Nazi Germany. He also went on to make the specious comparison that Russia is trashing the United Nations and its veto power at the Security Council in the same that the Third Reich gutted the former League of Nations.

The perverse reasoning coming out of Washington, London and Paris with regard to Syria and Russia is ludicrous. It belies an astounding distortion of how the Syrian war was instigated and fueled by the same Western powers in the first place, with their covert support of terrorist proxies for the criminal objective of regime change.

If any historical parallels are to be made, it is the US, Britain and France who are acting as fascist, rogue states and who have gutted the UN.

However, being ludicrous is not funny when such lunatics have their hands on the political levers to launch wars.

Britain’s foreign minister Boris Johnson may be a shambolic figure of amusement. But the clown is juggling words and sinister sentiments that he no doubt has picked up while prancing along the corridors of power in Whitehall.