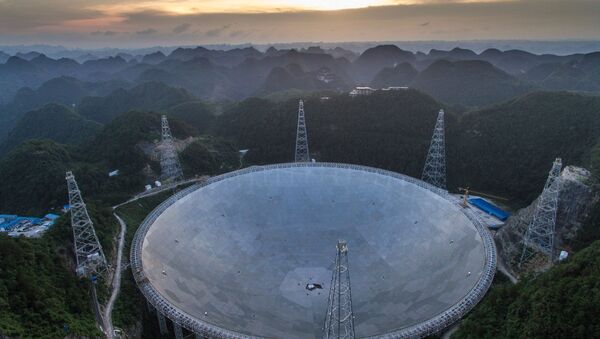 Though often politically at odds, there’s one thing that can, apparently, bring China and the United States together: aliens.

China and its massive new Five-Hundred-Meter Aperture Spherical Telescope (FAST), which began working in September, has joined the international Breakthrough Listen program, "by far the most comprehensive astronomical search for intelligent life ever undertaken," according to Breakthrough Initiatives, which funds the program.

Breakthrough Initiatives is a privately funded series of long-term astronomical initiatives that aim to listen for extraterrestrial life, figure out what we should say to extraterrestrials and how, and develop technology that will take us – or our messages – deeper into space.

Breakthrough Listen, a $100 million program launched in 2015, scours space for signals from other civilizations that might be out there. Two of the world’s largest radio telescopes are already taking part in Breakthrough Listen: the Green Bank Telescope in the US and the Parkes Observatory in Australia. The Automated Planet Finder at Lick Observatory in California is on the team, searching for laser signals.

The program aims to conduct a complete survey of the million stars closest to Earth, the plane and center of our galaxy and the 100 nearest galaxies, and to make all data publicly available.

Having China's new telescope, owned by the National Astronomical Observatories of China (NAOC), on the hunt is going to help a lot. The $180 million mega-project FAST is by far the world’s largest filled-aperture radio receiver, and in addition to listening for aliens, can be used to learn more about the origins of the universe by mapping hydrogen – the building material for stars flung outward by the Big Bang – in distant galaxies. It will also help scientists find more pulsars and possibly detect gravitational waves, the ripples in space-time that Albert Einstein predicted in 1916 but were only directly observed earlier this year.

The telescope "will be one of the most powerful instruments to search for the potential intelligent life beyond Earth," said Director General of NAOC Jun Yan at a signing ceremony announcing the collaboration in Beijing October 12.

"The FAST telescope is a remarkable instrument with unprecedented power," said Executive Director of Breakthrough Initiatives Pete Worden. "We are delighted to be collaborating with NAOC."