China Poised to Take Over US Air Base, Invest in Portugal's Azores 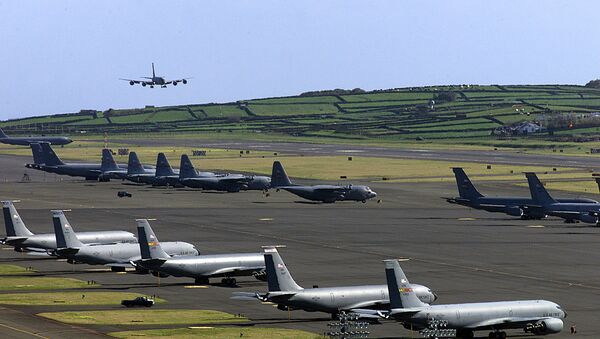 A year after the US decided to roll back its presence in the Azores, it looks like China is ready to step in and use the Lajes Field air base on the Portuguese-run mid-Atlantic island chain.

In an interview with Bloomberg on Tuesday, Portuguese Prime Minister Antonio Costa said that China was likely to use the Lajes Field air base on the island of Terceira for scientific purposes.

Soft Power: China Stepping Up Its Global Economic Expansion
The islands are “very important both logistically in the Atlantic Ocean but also in terms of technology and research, in the field of climate change and deep water research,” Antonio Costa said.

He added that while Portugal, which is NATO contrary, would continue to honor its defense pact with the US, he respected Washington’s decision to reduce its military presence on the islands.

Antonio Costa said that this was a good opportunity to establish a base for scientific research on the islands, that’s why he was ready to consider pertinent proposals by anyone, including China.

Some local elites and US Congressman of Portuguese descent, Devin Nunes, were quick to criticize the Prime Minister.

“Effectively we are divesting from billions of dollars’ worth of infrastructure at Lajes Field that is likely to end up in the Chinese government’s possession,” Nunes wrote in a letter to Defense Secretary Ashton Carter, obtained by Sputnik Brazil. 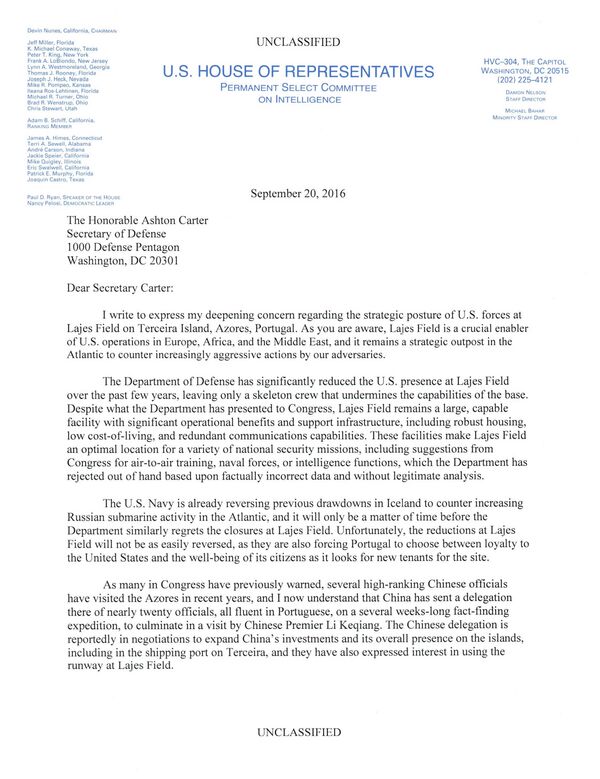 He wrote that several high-ranking Chinese officials had visited the Azores in recent years and that China had sent there a delegation of nearly 20 officials, all fluent in Portuguese, on a fact-finding mission, “to culminate in a visit by Chinese Premier Li Keqiang to discuss expanded Chinese investments and the overall presence on the islands, including in the shipping port on Terceira, and they have also expressed interest in using the runway at Lajes Field.” 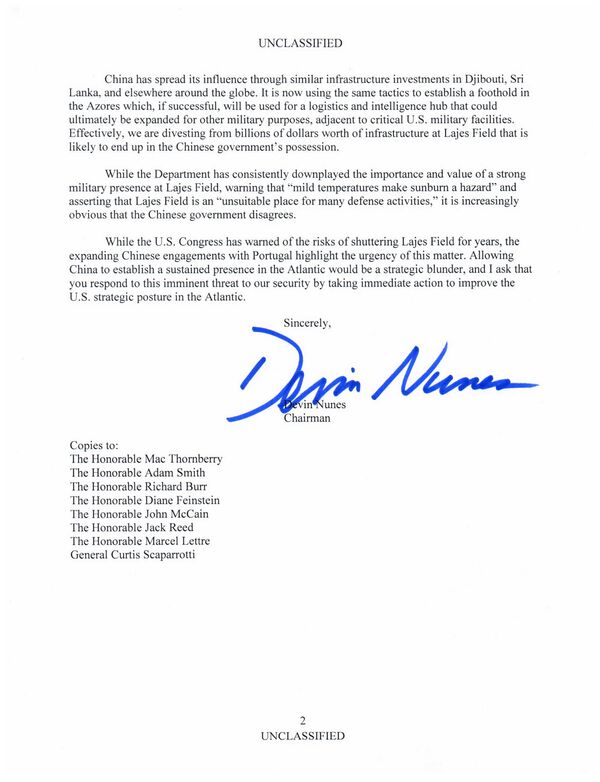 “They want to use the Azores as a logistics and intelligence hub that could ultimately be expanded for other military purposes, adjacent to critical US military facilities,” Nunes warned, adding that allowing China a permanent military presence in the Atlantic would be a strategic blunder and asked Carter to “respond to this imminent threat to our security by taking immediate action to improve the US strategic posture in the Atlantic.”

Water and Power: China Eyes Offshore Expansion Via Floating Nuclear Plant
Chinese President Xi Jinping stopped over in the Azores in 2014 on his way home from Chile and even had a meeting with then Portuguese Vice Premier Paulu Portas.

Last week two Chinese embassy officials in Lisbon arrived in the Azores to discuss the possible creation of a Chinese-Portuguese marine research center on the islands.

In Portugal, meanwhile, public opinion is divided on the issue with the opposition parties insisting on continued cooperation with the US and no foreign investments in the Azores.

Alexandre Krauss from the Alliance of Liberals and Democrats for Europe (ALDE Party) said that Antonio Costa acted irresponsibly by allowing himself to make light of serious matters and allowing China free access to the Azores.

In an interview with Sputnik, Antonio Soares Marinho, a Social-Democratic member of the Azorean parliament, said that “the Azores desperately need investments, no doubt about that. 38 percent of local youths are unemployed, and we welcome any investments here, especially into new technologies, climate change, etc.”

He added, however, that because Soares’ announcement came just ahead of upcoming elections, this could be “another propaganda ploy by the Socialists.”

In China, meanwhile, the state-run news agency Xinhua published a statement by Prime Minister Li Keqiang who described Portugal as China’s “good friend in the EU” and underscored the growing scope of mutually beneficial cooperation between the two countries.

The Lajes Field air base served as a key link between the US and its NATO allies and the Middle East. During the Cold War, the base was used to track Soviet ballistic missile submarines and guided missiles in the region.