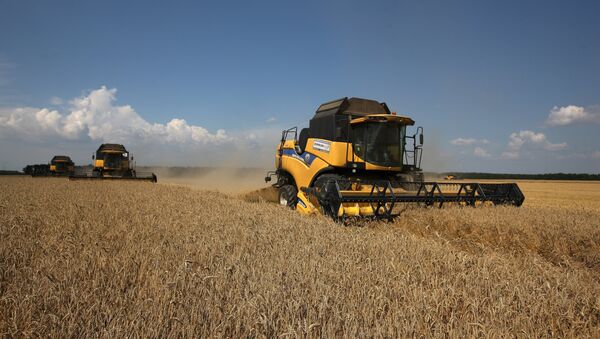 © Sputnik / Vitaliy Timkiv
/
Go to the photo bank
Subscribe
Venezuela plans to sign an agreement with Russia in the coming days on the supply of wheat over the next two years, Venezuelan President Nicolas Maduro announced.

MEXICO CITY (Sputnik) – The deal will ensure the supply of "all the wheat that Venezuela needs for making bread," Maduro said as quoted by El Universal on Wednesday, stressing that "Russia is the largest producer of wheat in the world."

Russia's agricultural watchdog Rosselkhoznadzor announced last week that Russia could start supplying wheat to Venezuela by the end of this year if the two sides agree on food safety and phytosanitary requirements for grain imports.

Statue of Hugo Chavez Presented as Gift From Russia to Venezuela
Venezuela relies almost exclusively on imports to satisfy its demand for wheat, according to Rosselkhoznadzor.

In 2015-2016, Russia exported a record-breaking 33,893 million tonnes of grain, including 24,604 tonnes of wheat, surpassing the United States and Canada. Grain exports for 2016-2017 may rise further to 40 million tonnes, according to the Russian Agriculture Ministry.

With Europe's upcoming harvest forecasts slashed, Russia is likely to become the top world exporter of wheat for the first time in 2017.

The Russian Ministry of Agriculture forecasts a grain harvest of 106-110 million tonnes in 2016.