Syrian Conflict Is 'Result of Western Inability to Understand Crisis' 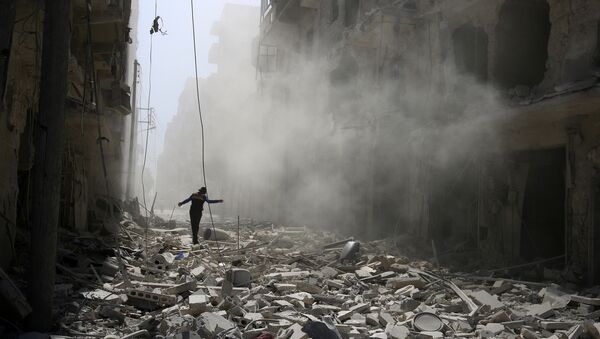 French politician Valérie Boyer believes that France should continue dialogue with Russia. Earlier, Russian President Putin canceled a trip to Paris scheduled for next week after France - following Russia's veto in the UNSC to block a French draft for a resolution on the ceasefire in Syria's Aleppo, unilaterally curtailed the visit's agenda.

In an interview with Sputnik, Boyer stressed that "it is impossible not to discuss problems with Russia," adding that Paris and Moscow should maintain dialogue and resolve international crises together.

"Russia is a friendly country, our countries are too closely connected by their history to interrupt dialogue," she said.

Boyer's statement came right after Russian President Vladimir Putin had to cancel his visit to Paris. The surprise cancellation comes two days after French President Francois Hollande questioned the usefulness of the meeting with Putin, in an interview with a French TV channel, citing bombardments of Syria's Aleppo.

"I am convinced that François Hollande must meet with the Russian President. Do we want to be enemies with Russia? Of course not," Boyer said.

Putin Cancels Paris Visit After Hollande Restricts Agenda to Syria
Speaking at a press briefing, Spokesman for the Russian President Dmitry Peskov said that Vladimir Putin decided to cancel next week's trip to France after some of the scheduled events were "dropped out of the program."

President Putin was expected to attend the opening of a Russian cultural and spiritual center and an exhibition. However, French President Hollande said that the talks would be confined to the Syrian problem and Syria alone.

"There is no doubt that what is happening [in Syria] is very serious, it's a disaster. It must be condemned by the international community in the strongest possible way," Boyer said. "This is the result of our powerlessness, our failure to form a grand coalition over the course of four years. This inability to understand the Syrian crisis and, in particular, the failure to act, are dramatic," she added.

France Urges UNSC to Vote on Upcoming Resolution on Syria Ceasefire
On Saturday, Russia used its right to veto in the UN Security Council to block a French draft for a resolution on the ceasefire in Aleppo, Syria. On Sunday, French President Francois Hollande said that residents of the Syrian city of Aleppo, a battleground for a conflict between government forces, jihadists and militant groups, had become victims of war crimes and urged to punish those who were behind them. He also expressed doubts that the October 19 meeting with Putin would be useful.

Following the cancellation of the meeting, Peskov added that Putin was ready to come to Paris for talks with his French counterpart "when it would be comfortable for President Hollande."