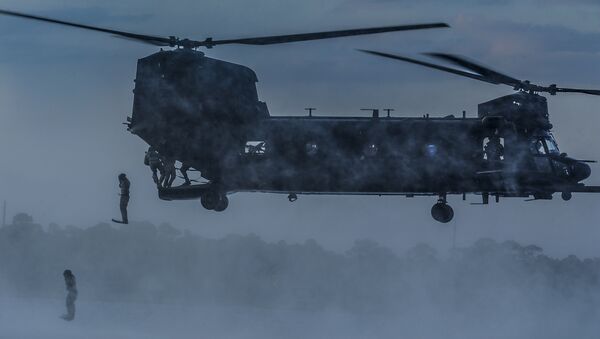 Seoul is increasing the capacities of its military forces for destroying North Korea's command centers and its leadership in case of a crisis, South Korea's military said Wednesday.

TOKYO (Sputnik) — During the audit held in the Army's Kyeryongdae military headquarters South Korean military officials said that the special forces were aimed to resist possible provocations from North Korea amid nuclear and missile threats.

"The Army is seeking to have a special operations unit capable of infiltrating [enemy territory], completing its given mission and coming back in one piece," Army Chief of Staff Jang Jun-kyu was quoted as saying by the Yonhap news agency.

The MH-47 series helicopters, which are considered to be supplied to South Korean Army, are modifications of the US helicopters Chinook, according to the country's military. They are equipped with aerial refueling and a radar system.

China Plots ‘Decapitation’ Strike on Kim Jong-Un Regime in North Korea – Reports
The Army proposes to secure the capability to carry out special missions by 2018.

Tensions on the Korean Peninsula intensified in September after the North claimed to have successfully exploded a nuclear warhead, having previously detonated a hydrogen bomb in January.