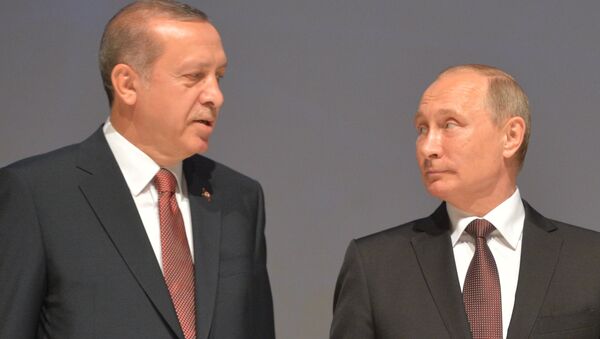 © Sputnik / Alexei Druzhinin
/
Go to the photo bank
Subscribe
On Monday, Russian President Vladimir Putin met with his Turkish counterpart Recep Tayyip Erdogan for the third time in barely two months. According to Norwegian newspaper Aftenposten, the increasingly warm "flirtation" between the two presidents is a cause for alarm in both Washington and Brussels.

Turkey Seeks Cooperation With 'Friendly' and 'Reliable' Russia, Rather Than West
The formal justification of Putin's visit to Istanbul was to give a speech at the World Energy Congress. However, Vladimir Putin also proceeded to broker a deal with Ankara on the Turkish Stream pipeline across the Black Sea, which is all set to ensure Russian gas supplies to Western Europe. The Turkish Stream is sometimes considered a successor to the South Stream pipeline which was suspended due to tensions over the Ukrainian crisis. Additionally, the supply of Russian nuclear reactors to Turkey was discussed. Lastly, Putin also congratulated Erdogan on having "stabilized Turkey" after the coup.

"We are at full speed to normalize relations," Erdogan was quoted as saying after the meeting.

According to Norwegian state broadcaster NRK, which investigated the reasons behind the "bromance" between Putin and Erdogan, Turkey felt abandoned by the West. When terrorists' bombs struck Ankara and Istanbul, no wave of sympathy came from Europe, in stark contrast to attacks in Paris, Brussels or Nice. President Putin, however, telephoned his Turkish colleague to demonstrate his support.

Putin's 'Strategic' Visit to Turkey to Help Moscow, Ankara Bring Peace to Syria
According to Norwegian newspaper Aftenposten, increased military cooperation between Moscow and Ankara may influence the outcome of the ongoing battle for Aleppo in war-torn Syria. As Russian newspaper Kommersant pointed out, for the Russian leadership it is essential to persuade Ankara to shut off supply lines to the Syrian opposition in eastern Aleppo.

Turkey is in turn deeply critical of the US and NATO, which work closely with Kurdish forces. NATO, of which Norway is a loyal member, is providing combat assistance to train up the Kurdish Peshmerga army, which are Erdogan's "archenemy," Norwegian newspaper Aftenposten pointed out. Many of the Turkish military and diplomats who have worked closely with the US, NATO and the EU, have been arrested or fired.

Meanwhile, Turkey has the largest army of NATO member states in Europe, which numbers up to 640,000 active soldiers. In September, NATO Secretary General Jens Stoltenberg visited Istanbul amid European concern to ensure that things remained as before between NATO and Turkey.

This is Why Moscow-Ankara Deal on Turkish Stream is a 'Setback for US'
The Russian-Turkish relations soured dramatically last year, after Russia launched a military campaign in Syria. The culmination came when a Turkish jet shot down a Russian bomber over Syria in November. Despite the fact that few believed in such a quick reconciliation, the both leaders spared no effort on mending fences. Today, new and closer relations between Turkey and Russia may have serious international repercussions, Aftenposten's columnist Per Anders Johansen concluded.
000000
Popular comments
Well I think the advertised image added in this page for Mr. Putin and Erdogan is explain whole story and no need to read anything else in this page about this subject. Erdogan: I know I’m not welcome in Russian policy anymore but I’ll be proud to tell you that all dirty jobs I did around they were for the sake of keeping my political position in Turkey and recall that the Kurdish opposition helped much to finger my political position but I’m ready to negotiate with you about Syrian file again. Putin: So, the Kurdish opposition fingered your political position, don’t tell me they also fingered something else !
Ibrahim Ahmad
12 October 2016, 22:26 GMT
000000
Newsfeed
0
New firstOld first
loader
LIVE
Заголовок открываемого материала
Access to the chat has been blocked for violating the rules . You will be able to participate again through:∞. If you do not agree with the blocking, please use the feedback form
The discussion is closed. You can participate in the discussion within 24 hours after the publication of the article.
To participate in the discussion
log in or register
loader
Chats
Заголовок открываемого материала
Worldwide
InternationalEnglishEnglishMundoEspañolSpanish
Europe
DeutschlandDeutschGermanFranceFrançaisFrenchΕλλάδαΕλληνικάGreekItaliaItalianoItalianČeská republikaČeštinaCzechPolskaPolskiPolishСрбиjаСрпскиSerbianLatvijaLatviešuLatvianLietuvaLietuviųLithuanianMoldovaMoldoveneascăMoldavianБеларусьБеларускiBelarusian
Transcaucasia
ԱրմենիաՀայերենArmenianАҧсныАҧсышәалаAbkhazХуссар ИрыстонИронауОssetianსაქართველოქართულიGeorgianAzərbaycanАzərbaycancaAzerbaijani
Middle East
Sputnik عربيArabicArabicTürkiyeTürkçeTurkishSputnik ایرانPersianPersianSputnik افغانستانDariDari
Central Asia
ҚазақстанҚазақ тіліKazakhКыргызстанКыргызчаKyrgyzOʻzbekistonЎзбекчаUzbekТоҷикистонТоҷикӣTajik
East & Southeast Asia
Việt NamTiếng ViệtVietnamese日本日本語Japanese俄罗斯卫星通讯社中文（简体）Chinese (simplified)俄罗斯卫星通讯社中文（繁体）Chinese (traditional)
South America
BrasilPortuguêsPortuguese
NewsfeedBreaking
00:25 GMTNetanyahu on Facebook Mocks Biden’s Alleged Nap During Talks With Israeli PM Naftali Bennet
Yesterday‘Crisis Crisis’: Trump Says US Becoming ‘Cesspool of Humanity’ Over Border Situation
YesterdayFBI: Human Remains Found in Wyoming 'Consistent With Description' of Missing Gabby Petito
YesterdayFrance-UK Defense Minister Meeting Canceled Over AUKUS Fracas - Report
YesterdayFrench Highliner Stops Parisians’ Hearts Crossing Seine 200 Feet Up
YesterdayUnited Russia Leads in Russian General Election With 42% of Vote
YesterdayCelebs Go Skating Host Hopes to Sign Prince Harry & Meghan Markle for the Show, Media Says
YesterdayLetters From Jehovah’s Witnesses in England Blame COVID Pandemic on Satan, Media Says
YesterdaySatellite Snaps Appear to Show Expansion of North Korea’s Nuclear Bomb-making Capabilities
YesterdaySylvain Mbappe: Satirical Website Offers Alternatives to 'Non-French' Names
YesterdayUnited Russia Party Leads in Parliamentary Elections With Over 12% of Ballots Counted - Exit Poll
YesterdayRussian Embassy in Paris Says Checks Info About Russian Man Arrested for Shooting Air Gun
YesterdayVoter Turnout in Russian Parliamentary Elections Exceeds 45%
YesterdayMany Haitians in Texas Border Camp Unwilling to Leave Despite US Deportation Plans
Yesterday‘Are You Undercover?’ Watch Police Detain Suspicious Man with Badge and Gun at DC Protest
YesterdayTaliban Fighters Seen Riding Swan-Shaped Pedal Boats - Photo
YesterdaySeveral Injured as Military Plane Crashes in Lake Worth, Texas, 'Heavily Damaging Two Homes'
YesterdayDaesh Claims Responsibility For Attacks in Eastern Afghanistan
Yesterday800+ Naked Swimmers Celebrate Approach of England's Autumn Equinox
YesterdayUS National Whelan Tells Family About Physical Assault in Russian Prison