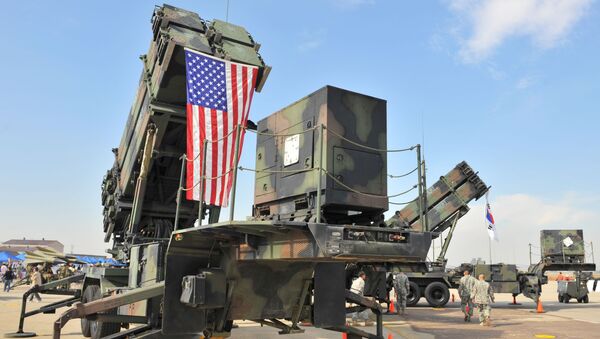 © AFP 2021 / KIM JAE-HWAN
Subscribe
US global missile defense network is posing a threat to free and safe use of outer space by any country, the Russian General Staff stated on Tuesday.

"The US missile defense system is posing a threat to the free use of outer space by any country. Its anti-satellite capabilities are one of the reasons why the US is opposed to any agreements that ban placing weapons in outer space," Lt.Gen. Viktor Poznikhir said.

He added that the Standard Missile 3 (SM-3 Block IIA) with increased destruction area allow to destroy Russian and Chinese spacecraft.

"Moreover, given the global nature of the actions of the ships equipped with interceptor missiles, the US will be able to interfere in space-related activities of any country," Poznikhir stressed.

Beijing: US Missile Defense in Europe Poses 'Direct Threat' to Russia
The first deputy chief of the Main Operational Directorate of the Russian General Staff also said that the deployment of the global missile defense network by the United States is not linked to Iran or North Korea, but aims to gain strategic superiority over Russia and China.

Lt. Gen. Viktor Poznikhir added that North Korea was only demonstrating a possibility to create ballistic long-range missiles, while it was absolutely inappropriate to talk about Iran’s threat following the nuclear deal.

"The decision of the United States to create a global missile defense system is not a response to Iran or North Korea’s missile threats. It is based on the desire to gain military superiority over Russia and China," Poznikhir said at a briefing at the Xiangshan Forum.

He stressed that through the expansion of the missile defense system the United States were creating a powerful striking component for potential "decapitation strikes" against Russia and China.

The deputy chief said that the true objectives of the establishment of the US global missile defense system is to reduce the potential of Russian nuclear power and the ability of complete zeroing of China's nuclear capacity, as well as expanding of abilities for the destruction of the Earth's artificial satellites on low orbits.

Zoanthropy
11 October 2016, 11:30 GMT1
000000
Until the fascist(Neo Nazis)neocons in the USA are neutralised,these lunatics think that they have the right to dictate to the world what,where and how the nations of the globe can behave.That they have moved this to include Space is just showing how little regard they have for any Treaty or Law they signed and their willingness to break them if they feel it is in their interests.Their infamy will outlive them and be used as an exemplar to teach future generations about the abuse of power by a small clique without electoral backing.