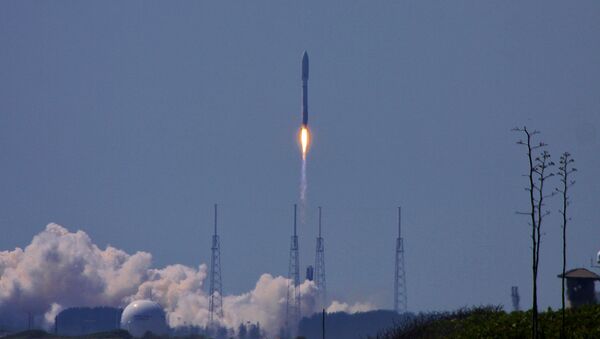 The US Air Force’s unmanned X-37B space plane has now spent more than 500 days orbiting the Earth, without statement or explanation.

The 29-foot unmanned plane is part of the Air Force's orbital program. Launched May 20, 2015, it is the program's fourth flight (hence its other name, OTV-4 for Orbital Test Vehicle-4). The first OTV took flight in 2010 and spent 224 days in orbit; two others brought the total number of OTV days in orbit before 2015 to 1,367, according to the Air Force.

The full purpose or intent of the program? The US Air Force remains mum.

The Air Force will only say in its program factsheet that the initiative is to "demonstrate technologies for a reliable, reusable, unmanned space test platform for the US Air Force. The primary objectives of the X-37B are twofold: reusable spacecraft technologies for America's future in space and operating experiments which can be returned to, and examined, on Earth."

The Secure World Foundation, a Colorado-based private foundation dedicated to the peaceful, sustainable use of space, found in its 2010 fact sheet on the X-37B program that "none of the potential missions posited by the US military appear to justify the program’s existence, especially on a cost basis …"

This has led to speculation that the spaceplanes are intended to be used to capture satellites, as was mused in a 2014 Guardian article, or even that the American military is testing space-to-earth weapons.

Secure World found suggested that it is most likely that the plane is an on-orbit sensor platform, containing "various sensors used for intelligence collection of the Earth from space, potentially including radar, optical, infrared, and signals/electronic intelligence (SIGINT/ELINT) suites to flight-test and evaluate new sensors and hardware." Brian Weedon, a consultant with Secure World and former Air Force officer who wrote the fact sheet, put it more bluntly in an interview with ABC in 2014. "What I think is more practical [than other theories] is that it's setting up technology for surveillance," he said.

Experts speaking with Air and Space Magazine in 2015 generally concurred. Any technology the Air Force is testing on its spaceplane must have military applications, the magazine noted, possibly for communications, navigation, surveillance or anti-satellite and counter-anti-satellite operations. Most likely among these are advanced surveillance sensors, the magazine suggests.

“I think that’s probably what they’re not telling you, that there are payloads in there that might be part of the design for future reconnaissance satellites,” said Director and Senior Fellow in the Strategic Technologies Program at the Center for Strategic and International Studies James Andrew Lewis in the article.

“The idea of being able to launch an unmanned research platform that can stay up there for months on end provides you with all kinds of capability, both military and civilian,” said Chris Hellman, a policy analyst with the National Priorities Project, an American budget watchdog group, to the Christian Science Monitor in 2010. The idea of American eyes being able to hover at low orbits over any part of the planet has security experts and arms control advocates concerned, the story noted.

NASA has revealed that on this particular mission, it is carrying a materials experiment as well as facilitating a solar sail demo by the Planetary Society and giving nine CubeSat nanosatellites a lift, according to the Daily Mail.

Space.com reports that Aerojet Rocketdyne claims that it tested a new thruster onboard the plane, and that the Air Force is also testing a new propulsion system.

NASA began the X-37B program in 1999, then transferred it to Defense Advanced Research Projects Agency (DARPA) in 2004 to test an Approach and Landing Test Vehicle. The Air Force took over after 2006.